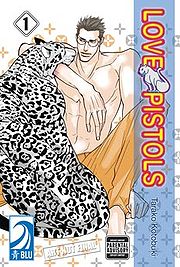 Love Pistols is a japanese yaoi comic of that is not of furry interest by artist Tarako Kotobuki. While there are animal undertones with the 'true souls' it is not Furry action. The characters are still human.

In a world where some "people have evolved from animals other than monkeys, and they can sense each other’s animal souls!"[1]

The series was going to be named Sex Pistols, but was renamed to avoid any legal trouble.[2]