Love Can Be Different

Love Can Be Different (Russian: Любофф бывает разная) is a furry comic book loosely based on the story with the same name by the Russian furry author Anatoly Orkas. The art for the comic is drawn by Miles-DF. Both the story and the comic are originally in Russian, with English versions of the panels released almost simultaneously. The first chapter has been released; the second one has been transferred to the publisher, and the third and final one is completed and pending. The story revolves around Huska (Russian: Хаска) and Richard (Russian: Ричард).

Love Can Be Different Vol. 1[edit]

The first chapter begins with Huska getting thrown into an apparent prison cell. She has a cellmate, Richard, whom she is familiar with. He refuses to share his blankets at first, so she must try to sleep on a wooden bed.

When dinner comes around, Huska attempts to snatch Richard's bowl of gruel with little success, but manages to steal his bed and blanket. He tries to work his way into the blankets with her, but she fends him off with a kick. He pounces her and ties her up in a blanket. He tries to slip off her pants, but she requests he kiss her first. They share a kiss without incident, and then he offers to untie her if she promises to follow his orders. She agrees. He distracts her and gets back into his bed with his blanket.

She wants the blanket too, so he asks her to undress and get naked. She complies, getting nude and then crawling into the blanket with him. He feigns disinterest in anything further, so she rolls over and snoozes, but soon he grasps her and pulls her into a spooning position. For a time she dreams, but soon she is awakened by him, naked and aroused. The two proceed to make love on the wooden bed, with romance apparently growing between the two.

Love Can Be Different Vol. 2[edit] 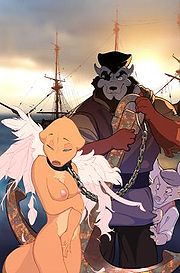 Richard is sentenced to death for crimes he did not commit. While the exact plot has not been disclosed yet, the preview pages available show that Huska is negotiating something with a pirate captain, and Richard is brought to the executioner's block.

Love Can Be Different Vol. 3[edit]

The first volume of Love Can Be Different has been published in English through Hot Cider Press, with updated English text and the inclusion of additional previously-unpublished artwork. The pages are officially found on Miles-DF's art archive on Fur Affinity, but with current service outages, the series can also be found on Fchan. The second volume is currently pending printing; a few preview pages are available on Fur Affinity as well. The third volume has been completed, thus finalizing the series.