Lorraine Lin (b. May 7, 1990), is also known by her internet alias Defiance. She is most prominently known in the furry fandom as her alter ego General Nyxis J. Pierce, a pink bat knight with rose-patterned wings. Lorraine obtained a B.S. in Computer Science from Mississippi State University in 2012 and a Ph.D. in Human-Centered Computing from Clemson University in 2019. 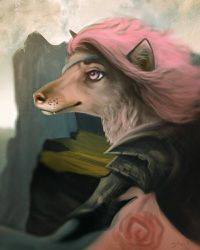 Born in Gainesville, Florida and raised in Vicksburg, Mississippi, Lorraine found a deep passion for creating her own fantasy and science-fiction stories at a young age. Crediting Peter S. Beagle, Don Bluth, Walt Disney, Hayao Miyazaki, and Osamu Tezuka as her earliest and most impacting story-telling influences, she published her first children's fantasy novel Revenge of Fireblade at age fifteen. She has since been devoted to finding new and interesting ways to bring characters to life.

Lorraine has created interweaving stories for the characters that she has taken on as muses throughout her life. In order they are Rainbow the Alicorn (created at age seven or eight), Lyrit Twilight the Wolf (age thirteen), Nyxis Pierce the Bat (age sixteen), Wing De Fiancee the Fox (age eighteen), and Tazzle the Thylacine (age twenty-one).

Lorraine currently enjoys expanding the most upon Nyxis's character and world; subsequently, the bat has a webcomic in progress revolving around her.