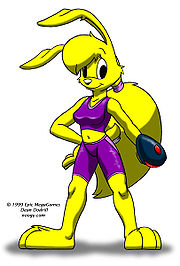 Dean Dodrill's character Lori Jackrabbit. This image was used on the CD label and the packaging of the second game, Jazz Jackrabbit 2: The Secret Files.

Lori Jackrabbit is a fictional character who originated in the Jazz Jackrabbit series of computer games. Lori was first intended to be Spaz's girlfriend or love-interest, as can be seen in the original Jazz Jackrabbit 2 ending cut-scene. Dean Dodrill thought she would make a good playable character for the to-be-released The Secret Files add-on to Jazz Jackrabbit 2. However, because the game's publisher Project 2 Interactive announced she was the lost sister of Jazz and Spaz she was given that role. Lori is the creation of Dean Dodrill (also known as Noogy) and Jon MacLellan (also known as Jeh).

According to her creator Dean Dodrill, Lori is a passive character who likes to paint and practise athletics. She was supposedly born on March 13, 1982 (though her date of creation was March 13, 1998). Her physical information is as follows:

Lori has her own forum at the JCF and even her own fansite, Lori Central, maintained by DrJones and Haze Hackrabbit. However, these are no longer active and are now archived.

Lori is usually seen wearing a two-piece purple jumpsuit. And being not your average adventurous tomboy-bunny, she's more than willing to save the day, on Carrotusian soil in her share of battling, with her brothers, the evil forces of Devan Shell.

Lori was only available in The Secret Files, the same game's demo and the much delayed Christmas Chronicles game, which featured a few winter-themed levels.

Lori's abilities in the game involved the standard helicopter ears that both her brothers were able to use as well as the superspeed move where the player had to tap the run key without pushing any directional buttons to make the character charge up their running speed.

All three characters had a special move that was meant for passing barriers or taking out multiple enemies. Lori's move was a fast spinning kick that gave her the ability to go through multiple enemies.

In recent times, after Epic Megagames canned anymore Jazz Jackrabbit projects, Lori thankfully lives on in the minds/hearts of loyal Jazz fans, especially on her own behalf. Her biggest fan is DrJones and is by many considered Lori's boyfriend, an idea supported by Dean Dodrill. Another loyal fan, though is DrJones' best friend Haze Hackrabbit who maintains Haze's Hideout. And thanks to those two, Lori has seemed to embrace herself a little beyond the Jazz universe.