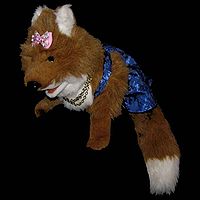 Loreena McFolkmanis, short Lori, is a timid, shy and conservative vixen and one of the main characters in Eurofurence's Pawpet Show. She always tries to avoid being embarrassed. She can be a real pain when she’s afraid of something or worn out by stress or physical exhaustion. Her weak ego makes it easy to confuse her, and she quickly loses her temper when she’s attacked verbally.

Lori appeared the first time on the Eurofurence 7 Pawpet Show in 2001. Her player and voice actor is Eisfuchs.

Like her three friends, Poke the ferret, Mika the snow leopard and Lionel the lion she is a Folkmanis puppet.

Lori’s parents live in the outskirts of a small town in Kansas, their house is as clean and normal as can be. Her Mother takes care of the household while her Father works at the bank as a financial counselor. Lori has no siblings and was always the heart of the family.

Lori likes to listen to classical and world music, chatting with other girls and visiting the hairdresser. She owns a small garden patch in the back of the dorm’s premises where she puts great efforts to grow colorful flowers and other plants. In the evenings she loves to watch her favorite soap operas on TV.

Mika was the first person she met in high school who actually tried to make friends with her. The relationship between Mika and Lori is still somewhat unclear, but it’s obvious that something has been going on between them in the past. Over time she accustomed a little more to life at the dorm and nowadays she pretty much likes all the people living there. Poke is the exception to the rule. His straightforward attitude and masculine behavior repels and fascinates her at the same time. While they are not outright foes they tend to pick on each other whenever there’s a opportunity to do so. Usually Lori loses the battle.

In the last years Lori has been going through some rough times. After she did a show with some of her friends in the dorm five years ago, there seems to be a curse on her. Every year in the summer something happens that messes up her life completely, and only with the help of her friends she is able to put it back in order again. She has been time-traveling, shape-shifting, performing on stage for a closet to sleep in and even been chased by phantoms.