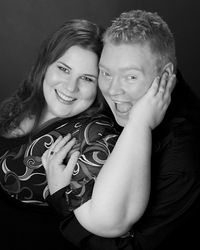 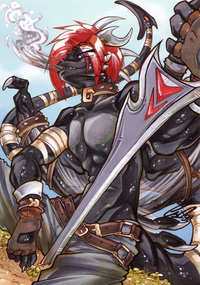 Lore, as depicted by Carnival.

Over the years, Lore has used a number of aliases, including Lore Loragon, Khion, LoneAntarcticWolf, Obsidian Lore and LawWolf to name a few. 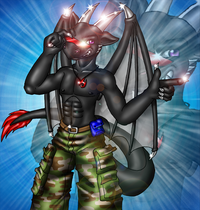 Lore, as depicted by Lord-Kiyo.

Although Lore had been a fur for twenty years prior, he officially joined the furry community in January 2007, after being introduced to it by his dingo friend Bingo Dingo. Lore developed his first fursona, a tan, grey and white timber wolf who had the uncanny ability to create and manipulate ice, as well as heal people. Lore derived this fursona from images he drew for stories about wolves that he used to write when he was much younger.

In late 2007, his fursona changed to that of a Wolf Dragon (a blue/gray wolf with dark blue dragon wings). He had three secondary fursonas - a Wolf/Husky Wolfdog hybrid named Reuben (or Lore), a black wolf named Shaide and a tiger/panther mix (black tiger with white stripes) named Jhett. Jhett and Shaide were created in memory of his older sister and younger brother, whom he never knew.

In late 2007, Lore relocated from Brisbane, Queensland to Melbourne for 18 months, where, in early 2009, he returned to Queensland to stay with his parents after their health began to fail. It was at this point that he changed his fursona to that of a pure dragon.

In February 2010, he got engaged to his girlfriend, Sonja, with their wedding scheduled for 30 July 2011.

He is also a part of the MiDFur 2011 Board as the Panelist Liaison and Dance Party Coordinator. 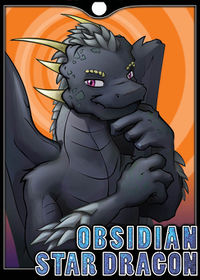 Obsidian, as depicted by Kraden

Lore draws anthropomorphic art, dabbles in writing poetry and short fan fiction stories, and also does a bit of photography, though his primary form of art is digital art.

In addition to his obvious fascination with canines and dragons, Lore adores eagles, white tigers, foxes and otters.

In his spare time, Lore goes bowling, hangs out with friends, plays LaserForce or LaserTag and surfs the internet. In February 2008, he is the head organizer and manager of the Pokémon Trading Card Game in Australia and New Zealand. In June 2008, he also became an Events and Conventions Coordinator for the same company. He has helped organize events such as GenCon Oz, Supanova Melbourne, Supanova Brisbane, and the Canberra Convention.

He holds weekly gatherings with local furs to go to dinner and bowling, usually having 4 - 6 furs show up. Although this may not be many in the grand scheme of things, for a semi- to true-rural area, it is quite a number.