Lokosicek (pronounced loko-see-check), also known as Lokosik (loko-seek), or just Loko, is a Czech fursuiter and furry artist. He enjoys a variety of music styles, improving his fursuit, watch BigBlueFox's video-documents, FursuitTV, Funday PawPet Show, and to hang out at IRC channels. 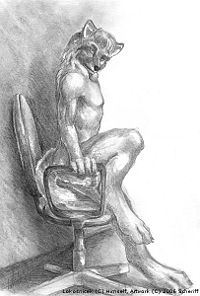 Lokosicek is a snow-white anthro werewolf with blue eyes. He is a student of second circle (out of seven) of magic at the Arcane Unniversity, and specialises in transportation and combat spells, but he is not skilled with them yet, as seen some months ago when a poorly cast portal spell transported him and his associate, human-formed dragoness Nelana, into a middle of fierce battle between two orc clans.

He mostly wears blue cloak with hood, and carries a white wooden staff with a shining crystal of quartz on the upper end. Recently he embarked with a few friends and mercenaries on a quest to find a hidden treasure.

Lokosicek found furry art and furry fandom accidentally in late 2001 while looking for photos of ligers. Among the real liger photos, he found Benjamin Eren Robinson's web Stripeymaney and liger-related furry art. From there he has found a way to VCL, DeviantArt galleries and Furnation webpages. For the next five years, he watched the furry art only, not realizing there was more. All changed in mid 2006 when he has accidentally found a BigBlueFox's video document from Anthrocon 2006. Eventually he found a Czech furry community and since then continues to discover the ever-fascinating world of furry fandom.

Eversince Lokosik saw the AC06 video, he was absolutely fascinated by the fursuits and fursuiting, and eventually he made his own fursuit. He enjoys to fursuit at local Czech zoos, entertaining both children and their parents. However, the first fursuit headpiece was poorly shaped, resulting in others to mistake him for a polar bear or even a sheep. His recently constructed new headpiece is much more wolf-like and he has since began making fursuit headpieces for others too.

Lokosicek developed a particular fondness for the fursuits created by Latin Vixen, ScribbleFox, Arend Studios, and TaniDaReal, with the last one mentioned being a source of his inspiration of headpiece making method (foam glued by hot glue).

Lokosicek's fursuit is the second full-suit in the Czech Republic. The first one belongs to RustyFoxi, who had it made by a professional theatre costume maker. Before 2007, there was no tradition of fursuiting in Czech lands, and Lokosicek strives to start one. Whenever there is an opportunity to do so, he is trying to convince other Czech and Slovak furries to make their own fursuits. Successfuly.. As of 2011, there now is at least 20 fursuits in Czech and Slovak republics total, with 10 more being in construction. 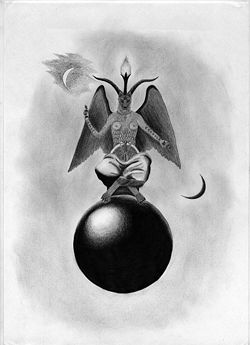 Baphomet as a wolf

Even though Lokosicek likes to draw, it ussually takes him very long to finish a single piece, and he is still new to drawing furry art. As an inexperienced artist, he often uses art and photos of others as a reference. His most favorite art medium is a pencil.

Lokosicek can be often found hanging-out at: