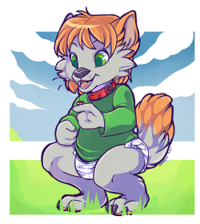 His fursona is a red fox/grey wolf hybrid babyfur (2 1/2 years old) who has identifying orange markings and mostly grey fur.

His fursona also has an adult version which is distinguishable from the younger version. The matured character has a black tip on the orange ear, as well as black paws with an orange ring.

Lobie has been observing the fandom since 2008, and has attended conventions since 2010.