Loki is a disambiguation page 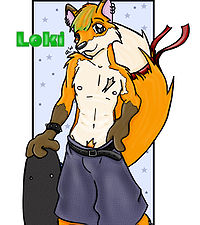 LoKi is often viewed as an anti-furry troll. However, he asserts that he is nothing more than a cute fox who enjoys the suffering of others. He claims to be the epitome of a "Furry Anti-Furry" - something much like a Furry Goon. Despite this, he claims to be generally a steadfastly loyal friend to people whom he cares about and that overall he acts more like a harmless sweetheart.

LoKi can be found on Crush! Yiff! Destroy! and Gayfaggotinc, and lurks at Encyclopædia Dramatica.