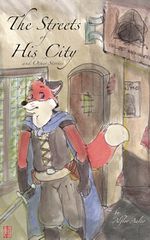 The Llyran Wars is a series of furry novels and short stories written by Alflor Aalto. They chronicle the continued adventures of Prince Natier, Kaarper, Sirius, Samrin and a number of others. This collection of novels and short stories takes place in the period of turmoil known as the Llyran Wars, a time when the fragile relations between the kingdoms of Llyra and Aarya grew to their thinnest and erupted in conflict.

There is currently a total of four novels planned for this series. Two have already been released, and the others are still in production.

The world of Llyra and Aarya was inspired by Europe during the High Middle Ages. The two fictional countries, as well as the countries that surround them, are not based on any real-world counterparts. The names in Aarya, however, do tend to sound more British, while the names in Llyra have many double vowels and consonants (similar to something you'd find in Wales).

Alflor was inspired to write this series after having been a lifelong fan of the Redwall books. Unlike Brian Jaques, however, Alflor wanted to create a series where the protagonists have just as many flaws and unlikable traits as do the villains.