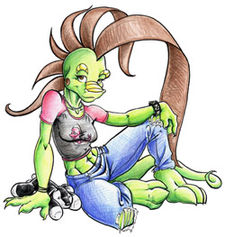 Lizardbeth, also known as Lis Boriss (born February 24th, 1983), is a furry artist from Philadelphia, Pennsylvania, USA. She graduated from the College of New Jersey with a Fine Art Bachelor's Degree.

Lizardbeth was the Guest of Honor for Furry Weekend Atlanta in 2009.[1]

Lizardbeth's fursona is an iguana and has been that species since 1997. Lizardbeth acts like a personal mascot and as a visual representation of her pen name, only with a bit more of her own life.

Lizardbeth creates most of her real-media pieces with Micron Pen and Ink, Copic markers, watercolor, and color pencil. She works with a variety of media, from acrylic and oil paints to collage. Her digital pieces are created on a Mac using Adobe Photoshop CS4. Lizardbeth used to create avatars for commission on Second Life.

In June of 2008 she began her black and white geek culture comic strip, Broken Plot Device.