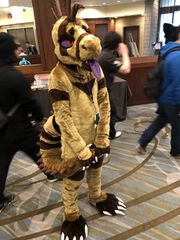 Caliban fursuit, built and worn by LizardToes at Furnal Equinox 2019 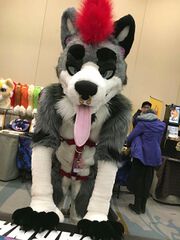 Makellyn fursuit, built and worn by LizardToes at Furnal Equinox 2018

LizardToes, also known as Caliban Iguana, previously as LoopSabertooth (born May 11, 1992), is a Canadian furry artist and fursuit maker from Toronto, Ontario, Canada.

LizardToes has been part of the furry fandom since 2003, and building fursuits since 2004, creating a small fursuit business in late 2014 named Frilled Lizard Studios. He has also attended Furnal Equinox since it's inception in 2010.

LizardToes has created a plethora of anthro characters over his years in the fandom, though he has only six that are actively used as of 2019:

LizardToes has built fursuits since 2004 but hadn't had a chance to show off his work publicly at Furnal Equinox 2010. In 2011 he started his first fursuit commission, a partial for Horlequism.

Over the following years, he would on-and-off make personal suits with a few commissions in between. His most known fursuits are his many versions of his character Makellyn due to him using the said character for building practice. He continues to build fursuits and hopes to be opening for commissions again in 2020.