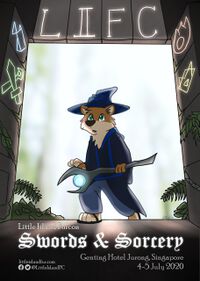 The upcoming Little Island Furcon will take place over July 4-5, 2020 at Genting Hotel Jurong, Singapore, and will be themed Swords & Sorcery.[1] The Guest of Honor for the second iteration of the convention will be Zephyxus, who will be releasing an art book called 'Beast Soul' during the convention.[2]

Early bird registrations opened on February 1, 2020 and are available on the convention website[3] until March 21, 2020[4]. Three tiers are available for interested participants, namely, Attendee, Sponsor and Super Sponsor tiers.

Due to measures implemented by the Singapore government in response to the COVID-19 pandemic, registrations have been limited to 249 participants to comply with the new rules[5]. Additional safety measures are implemented by the committee to reassure attendees that the convention will still carry on safely.