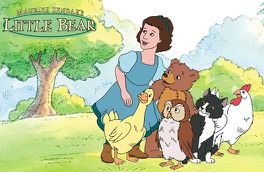 Little Bear is a Canadian animated television series, which focuses on a small, dreamy, and playful grizzly bear. Referred as Little Bear, he experiences adventures along with several other animals known only by their species' name. The series was produced between 1995 to 2001 based on the novels.

Other than the TV series, there was a movie known as The Little Bear Movie.