From WikiFur, the furry encyclopedia.
Jump to: navigation, search
Culture > Arts and crafts > Fursuiting > Fursuits > List of fursuit characters owned by Jimmy Chin
Jimmy Chin, having been involved in the furry fandom since 1990, has owned at least 19 fursuits. 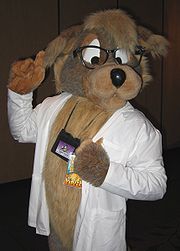 Yippee Coyote (Yippocrates Escondido) was constructed by Jimmy with assistance from animator Dave Kuhn. Yippee first appeared at the fursuit wedding of Topfox and Cataroo on Halloween 1996. His convention debut was at LosCon 23 in Burbank, and his public debut was at the 1996 Pasadena Doo Dah Parade, by invitation of Rapid T. Rabbit. Yippee's furry convention debut was at ConFurence 8, January 1997. Yippee has since appeared at numerous community events through Critters by the Bay as well as many conventions on stage and in the halls. In 1998, Yippee was photographed with Weird Al Yankovic at a party thrown by Mystery Science Theater 3000 creator Joel Hodgson. Yippee appeared at the Give Kids the World Village in 1999 and 2004. Yippee was in a reenactment of the Frantics sketch Boot to the Head at Further Confusion 2005, later reprising that role in a cameo in the short video Under the Same Sky in 2008. In 2009 as part of his Eurofurence 15 trip, Yippee appeared at the Eiffel Tower in Paris.

Yippee owes much of his design influences not to Warner Brothers' Wile E. Coyote, but Bent-Tail Coyote, a minor Disney character from several 1940s Pluto cartoons including Legend of Coyote Rock. In 1997, Yippee tried to pitch himself as a potential mascot for the Phoenix Coyotes hockey team. Yippee appeared in a cameo on a 1999 episode of Adventures with Kanga Roddy.

Although Yippee was not originally intended as his fursona, Jimmy is often referred to by the nickname Yippee, and the name is used on convention badges and online aliases. Yippee was the Fandom's Favorite Fursuit Fracas 2009 Champion after making it to the final 16 but falling to the eventual champion both previous years. Yippee had some minor maintenance to keep him active, including a new muzzle in 1999 and fourth set of handpaws, but he retains the same body and head since his 1996 debut.

Yippee bore the California flag in several fursuit parades including Anthrocon 2008 and Eurofurence in 2009 and 2010.

Walden is a reindeer, originally built by animator Shawn Keller for a Disney cast holiday party in the early 90s during Shawn's fiberglass-head era. Jimmy acquired him in 2003, retrofit and re-debuted him in December 2003. Walden has appeared at holiday events through the San Francisco Bay Area, as well as Megaplex 8 in 2009 for their Christmas in July theme. Walden was featured on the Fursuit Calendar from Sofawolf Press for the month of November 2009. At the San Jose Holiday Parade in 2010, Walden dropped an antler when the aluminum support rod broke.[4] His head was refurbished with steel rods in his antlers, and performed at holiday events in December 2011.

Twilight is a lavender and violet bunny constructed by Jimmy and debuted at Bunny Jam, then Megaplex 7 in March 2008. Twilight sometimes has an earring in his right ear and seven 4-point white stars in his fur. His name was inspired by the Electric Light Orchestra song Twilight, not the young adult vampire series. Twilight was the confluence of several influences (Jimmy's original fursona was a rabbit), coupled with a need to complete him for an Easter weekend event, Jimmy was inspired to finish in about six weeks, minus the feet.[5] He is scented with grape bubble gum body spray, and is sometimes called "purple drank bunny." Twilight participated in the FC2010 Dance Competition. 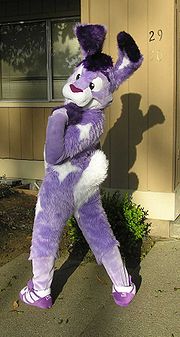 Twilight before his debut at Bunny Jam 8

Baron is a German Shepherd Dog character built by Javachickn, from collaborative designs between Java and Jimmy. The name, as well as the red scarf, goggles, and black fingerless glove/spats markings allude to the German World War I flying ace, the Red Baron. Baron debuted at Further Confusion 2010. [6]

PolkaDog is a sporty dalmatian character wearing a black custom jersey from the defunct Portland Fire WNBA team since 2003. Over the years PolkaDog has had several iterations:

Pachinko is a lop-eared female bunny character. Pachinko's head was made by Mixed Candy, and Cabby built the rest. Pachinko debuted at Further Confusion 2006.[8] Cabby sold Pachinko in June 2011, and Jimmy has performed her since then. [9]

Biscotti is a beige mutt puppy, originally built by Lacy as Blondy in 2009,[11] who became Peaches after a new body and eye recolor by Talutie of Dream Machine Costumes in 2015.[12]. After acquisition in 2017, the suit was renamed Biscotti.[13]

Champ is a bouncy and lovable Black Lab/German Shepherd dog, made by Arend Studios. Champ appeared in the 2008 Guinness Book of World Records under the entry "Largest Furry Fan Club" for Anthrocon 2006.[14] Champ was acquired in September 2018 from Electropaw.[15]