From WikiFur, the furry encyclopedia.
Jump to: navigation, search
Lists > of characters > in comics > List of characters in Exodus

The following is a list of characters in the webcomic Exodus. 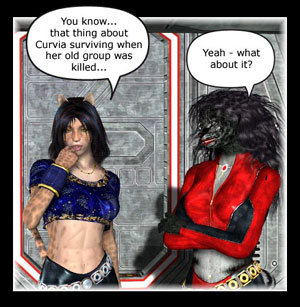 Calico is a Cheetah Bioroid, whose original role was to be the outsider who knows very little. Such a character can legitimately ask questions of other characters and listen to the answers, thus providing the reader with information. This approach inevitably leads to character development, and Calico became more important to the story. Calico reluctantly started a relationship with Carla because her friend wanted her to. It is currently unclear whether this arrangement suits Calico or is another expression of her personality: Calico will do whatever it takes to survive, but she can be so detached and clinical that she fails to understand other peoples feelings and motivations. Calico has strong influence over the near A.I. Diogenes, which she demonstrated during episode 6 by having him shut down all power to the ship. She probably doesn't understand how uncomfortable this much control of the ship makes other members of the crew.

A Chimera bioroid with Canine and Raccoon genes, Carla is energetic, flighty and opinionated. She is dedicated to the idea of bioroid freedom, largely due to an unusual (for a bioroid) upbringing. Her "parents" are human radicals who adopted her and brought her up as a normal human child. Carla has seen both sides of the situation with bioroid rights. She did have a very difficult childhood, as the only "Fur" in an inner-London school. It has been established on the forums that she was so badly bullied at school that she once attempted to cut her own tail off. Carla is a Lesbian, and deeply enamoured of Calico. Her friend has consented to a relationship but it's unclear as to whether the sexual side of the relationship will last. Carla wants more than just sex from Calico, but Calico may not be able to offer what she wants.

Foxy is a Snow Leopard bioroid from Australia with a mysterious past (in that the role-player who created her character has not yet detailed everything about her background and Pepper ran with that). Foxy began as "mother hen" to the rest of the group, and has developed into one of the leaders. It has been established that she has military "Special Operations" experience.

Curvia is a bioroid based on an unspecified Feline template. Like Foxy, she is Australian, and like Foxy, she has Special Operations experience (she is a Mecha Scout Pilot). Unlike Foxy she has a fiery temper and aggressively uses whatever tactics suit her agenda. Curvia is the closest the group has to a Terrorist/Freedom fighter. She is a born leader, commanding loyalty and respect from her followers. It was revealed that Curvia had a stormy on and off relationship with Reuel in the past. She seemed to cope fairly well with his death in late 2005 however. During 2006, her original player contacted Pepper and requested that Curvia be removed from the comic. Episode 6 was therefore changed somewhat to allow this, and Curvia died in late 2006.

Reuel is a "spacer" bioroid with Bat genes. Studious and well educated, he looks geeky, but is fiercely dedicated to the freedom of his people. He firmly advocates a non-violent approach to resistance, but is able to perform violent acts when he feels he must. Reuel has obvious cybernetic parts - the result of an attempt on his life that only narrowly failed. It was established that Reuel has a stormy on and off relationship with Curvia, which has also involved her shooting at him (presumably not with actual intent to hit him). Reuel rammed a blockading Naval vessel with his shuttle in order to clear the way for the others to escape, and is presumed dead.

Albarez is a feline bioroid who was trained as a fighter pilot. Cocky and self-sure, he lives to fly. Albarez is a follower of Curvia, and does not especially hold to Reuel's ideal of non-violent resistance. He currently pilots the ship Charles Lindburgh. He carries a cybernetic bullwhip, and is given to showing off with it to impress the ladies. It has been established on the forums that he is quite superstitious. 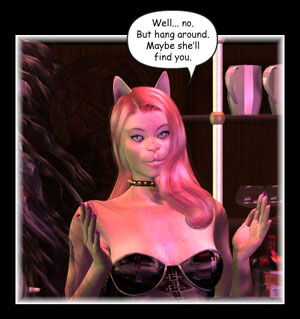 A pink furred feline bioroid, Amy comes across at first as young and full of fun, but with the loss of several friends, she has become harder and more angry. She is very intelligent and has shown skills as a hacker. Amy is a follower of Curvia, and though not a violent person, she is used to it and can fight when she needs to. It has been established on the forums that she has a crush on Renn, and is probably distraught by his apparent death at the end of Episode 4. Amy has become more vocal and slightly sarcastic over the duration of Episode 6, perhaps a sign that something is bothering her.

Renn is a tall, powerful feline bioroid who is very spiritual and calm. He is intelligent, and trained as a mechanic and technician. Not the greatest speaker, Renn is very dedicated to personal freedom, having escaped his owners time after time, despite punishments when caught. Renn had a brief fling with Calico, before Calico completely realised the depth of Carla's feelings for her. Renn is very loyal to Reuel, and selfless - he immediately gave up his own life to give the others a chance to escape. It was later revealed that Renn did not die during Episode 4 as at first thought. He was just captured. Again.

A Lion-based bioroid, Regis was designed to be a soldier, and it shows. Not very bright, he is aggressive and bad tempered even with his friends. He is very loyal to Reuel, though he finds it hard not to use violence to solve problems. It was revealed on the forums that Regis is one of the few of his model to still be alive - the rest were recalled and "retired" due to unspecified behavioral problems which his personality hints at. Regis had a relationship with a Tiger bioroid called Lira, who died in the assault on Reuel's base. Regis doesn't seem to have even acknowledged this event yet, let alone dealt with it.

Sashi is a black skunk bioroid. She is a skilled communications and sensor operator, and a follower of Reuel. A "glitch" in her design means she goes "on heat" on a monthly basis, a problem she herself can handle but which is hard for other people in the area, since she emits an aphrodisiac pheromone during that time.

Rajira is a bioroid with Tiger genes in her makeup, trained as a doctor and researcher. Older than the others, she has told only Foxy what she has discovered: that all bioroids are designed with a "death gene" which triggers at around 30 years of age. She keeps this secret while she works on a way to remove the gene, always aware that she herself is close to the critical age and time is running out. During episode 5 she was confronted with the body of one of her clone-sisters and revealed that she had some kind of empathic link with them. This was responsible for the "flashback" even of an earlier episode and indicates that Rajira may have latent telepathic abilities.

Specter is a Mouse bioroid, deliberately designed to be small enough to get into confined spaces and repair things. Specter always wears shades: though discussed on the forums, it is still unclear if these are simply for show or if they are actually a form of cybernetic implant. Specter joined the group when his human friend "Fyber" was killed, and has shown extreme calm in combat and a deadly aim with a rifle. He is nervous around felines, which is unfortunate since he is currently confined to a small ship load of them.

Diogenes is a "near A.I." who usually manefests as a holographic mouse. His conciousness is fully integrated with the computer systems of the ship, allowing him to monitor and override it's functions. Not being fully sentient, Diogenes could potentially be reprogrammed or have his code undermined. Calico has established a lot of influence over him, and may have done just that.