From WikiFur, the furry encyclopedia.
Jump to: navigation, search
Lists > of characters > in comics > List of characters in El Goonish Shive

El Goonish Shive has an ensemble cast, with a group of eight teenage lead characters being together in all multi-part arcs so far: In Sister they meet at the end, Night Out follows two groups of four (Elliot, Sarah, Tedd/Grace, and Grace/Tedd & Ellen, Nanase, Justin, and Susan), in Painted Black the other seven characters meet to discuss how to rescue Elliot, and all eight were together celebrating Grace's Birthday Party. The The New Students arc of Hidden Genesis seems to follow two groups of four who go to Moperville North (Elliot, Tedd, Sarah, and Susan) and South (Grace, Nanase, Justin, and Ellen.)

More information about EGS characters may be found in the character statistics.[1] 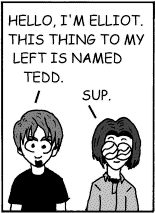 Elliot Daniel Dunkel (a play on the author's name, Daniel Elliot Shive) was once an average seventeen year-old boy and student of "anime-style" martial arts (which often lead to humorous DBZ parodies). Since the beginning of the comic, Elliot has been transformed into both an anthro-cat[2] and a female,[3] gained the ability to resume both forms at will thanks to a confluence of technology and magic, had a female duplicate (Ellen Dunkel) split off himself, fought a monstrous blob of goo, been beaten up by an anthro-hedgehog, and recently gained magical abilities (all of which currently involve him transforming into a girl, but with the indication of other abilities coming later). A level-headed character, Elliot is often the comic's straight man.

Elliot's best friend is Tedd, who he met when Elliot saved Tedd from a bully back in elementary school. Elliot has a knight in shining armor complex, meaning he feels compelled to help those in need, especially women, even if he does not particularly like that person. When this resulted in him saving Tedd, Elliot thought Tedd was a girl. While their friendship has always been and remains platonic in nature, the two often wind up in compromising situations, particularly if one or both of them is female at the time.

Tedd Drew Verres is an androgynous teenage boy with a knack for trouble and technology. Tedd is in love with Grace, and is Elliot's best friend. He wears large electronically enhanced glasses. Formerly shy due to being harassed for his feminine appearance, he has attained a great deal of confidence since being entrusted with developing alien morphing technologies,[4] which he uses in his spare time for his own amusement.

Ellen Danielle Dunkel is the female duplicate of Elliot, who was magically split from him in the Sister storyline. She initially strove to be his "evil twin" when she saw herself as an ephemeral "extra Elliot" and promptly snapped, but has since been adjusting into an identity of her own. Elliot considers her his sister, as she now is legally; Tedd considers her a "hot female Elliot;" but how she considers herself remains uncertain, even to her, and she did not settle on a self-identity for a long time. Although the origin and function of the Dewitchery Diamond, the object that created her, is unclear, she remains alive and well.

Ellen can shoot a beam from her hand that partially mimics the effect of Tedd's transformation gun set to "Female Variant #5". She is bisexual, but uncomfortable with her attraction to men - though she has openly admitted to finding Tedd attractive due to his naturally effeminate appearance. She is much more playful and flirty than Elliot, whom she has compared to herself as being "like [her] if [she] was being directed by George Lucas," i.e. rather wooden and deliberate. At the end of the Painted Black storyline, the sorceress Nioi cast a spell on her which has caused her to dream of a "second life" - in fact causing her to experience living the life of a female alternate of Elliot in another dimension, and apparently intended to give her the life experiences she would have had if she had grown up normally. This has led to some unexpected explorations of her personality, the most obvious of which was bringing to the surface her repressed discomfort with finding men attractive, which eventually resulted in her identifying as a lesbian.

Ellen and Nanase (who was once Elliot's girlfriend) have shared mutual attraction since the Night Out story arc. They revealed their feelings to each other at the end of the Grace's Birthday Party story arc.

Sarah Brown, at the beginning of EGS Elliot's best friend, has been his girlfriend since the Relations storyline. She is artistic and arguably the most normal character, with no special abilities other than pulling mallets out of nowhere, which is a normal female trait in EGS. Sarah is usually level-headed, considering the number of bizarre experiences she has had, and she rarely loses her temper. She once had an incident involving Tedd transforming her into a catgirl, since which she has been extremely cautious about transformations involving herself. Shive has said that in his high school comics, she was much more of a main character, and that he hates that she's become a background character in El Goonish Shive.[5]

Grace, formerly known as Shade Tail, is a shapeshifting squirrel/alien/human hybrid who spends a good deal of her time as a human girl. She can transform into a variety of forms, including squirrel, half-squirrel, half-cat, half-hedgehog, a duplicate of Tedd, and a human girl and is capable of creating "legion" forms, which are combinations of two or more forms. Having been genetically engineered as an assassin, Grace is extremely powerful, and at least some of her forms are fire resistant due to her being designed to kill Damien, but she is a pacifist, terrified of abusing her strength, and only uses her offensive capacity when her friends are in mortal peril. The traits she displays most often are innocence and cuteness. She has been Tedd's girlfriend since the Relations storyline. With the help of Tedd, she designed the clone form of a green-haired girl with African-Asian features[6] (and without antennae) which she can assume, and goes by the name Claire when using it. This enabled her to go into the public unnoticed by people looking for her usual forms. It appears that depending on her current transformation she goes through an abrupt change in weight, which did not occur until Tedd used the transformation gun on her, her power level also greatly fluctuates depending on her form.

Half-Squirrel-Power is close to Elliot's Level

Half-Jeremy-Power is greater than Sensei Greg's

Her name comes from Grace Sciuridae, a deceased girl whose DNA was responsible for her human appearance. "Sciuridae" is the family of rodents which includes the squirrels and itself derived from the Greek words skia ("shadow") and oura ("tail"). The full name can be seen as a pun on the common species name 'gray squirrel' - though Grace herself appears closer to a red squirrel in her altered forms.

Nanase Kitsune is Elliot's ex-girlfriend and Tedd's cousin. She is reported[citation needed] to be of Japanese descent, a fact also supported by the fact that her last name is Japanese for fox. A few of her traits also resemble that of a fox. She is another student of "anime-style" martial arts and was initially presented as the best student at the school Elliot and she attend, but it was later revealed that Elliot is holding back out of fear of hurting others (there have been no solid conclusions yet on who is the more competent martial-artist). Nanase is a dangerous fighter and magic user. She has learned to levitate and to transfer her consciousness into little fairy forms near her friends for communication using magic (she actually owns a cell phone, but in her words, "where's the fun in that?"). Nanase dresses provocatively when she can get away with it, as her family makes her dress conservatively in eyeshot. However, she disdains manipulative use of her looks, and her habit of choosing the good over the popular has hurt her social status at school[citation needed].

Nanase's new friendship with Ellen has led to some uncomfortable self-discovery, and after some speculation from Justin, Nanase revealed herself as a lesbian to Elliot and Susan. By various ways, all main cast members came to know that, but Nanase was unaware of this at the time. Since the Night Out storyline, Nanase has been attracted to Ellen and the latter is aware of that and has voiced frustration at Nanase's reluctance to come out. Nanase finally came out to Ellen at Grace's 18th birthday party, and the two shared a kiss. She apparently came out to the others at the party off-scene later that evening, but still considers her sexual orientation a secret to everyone outside of the main group of characters. She can speak Japanese, English, and at least a bit of French.

Justin Tolkiberry is also a student of anime martial arts, though of lesser skill than Nanase and Elliot, and friends with the two. He works part-time in a comic book and trading card games store. Justin is gay, and before he found out that Nanase was a lesbian, he teasingly suggested that she might be one, a fact he felt deeply ashamed over. Justin's last name is a reference to J. R. R. Tolkien and Gene Roddenberry[citation needed], and he has a geeky obsession with The Lord of the Rings and Star Trek. He's also a fan of the card games Magical Gathering and Yu-Gi-Oh!.

In Grace's Birthday Party, Justin's unrequited feelings for Elliot have begun to be addressed.

Tiffany Susan Pompoms was the last major character to be introduced in EGS. Initially a friend of Sarah and an extreme feminist (even to the point of misandry), Susan has developed friendships with all other major characters. As a reaction to seeing her father's affair with a blonde woman and her parents' subsequent divorce at an early age, events that have been partially shown in the Sleepy Time and Grace's Birthday Party storylines, she colors her hair dark blue and prefers and enforces the use of her middle name to avoid similarity with the blonde woman. Susan lives with her mother in a mansion and works in a video store. And as Dan Shive states in the webcomic[citation needed] Grace was supposed to be more evil and blonde. He says[citation needed] that the Shadetail/Grace character had changed to the Grace we all know and love. A remnant of the original version of Grace became her own character and she became Susan.

Susan has taught Sarah to use Hammerspace[7] and met Nanase on the optional Moperville joint class trip to France, where both Nanase and Susan gained access to magic. Relations between Nanase and Susan were portrayed as mutually unkind in Sister, but improved to friendship when Susan let Nanase pick Ellen's clothes for Grace's Birthday Party.

As a result of being transformed into a male for Grace's party, Susan has reconsidered her views on men as a whole and begun to come to terms with her father's actions. A flashback implies that her attitudes developed as an excuse for his behavior; i.e., that according to her mother "he couldn't help it, because he's a man."[8]

Recently, Susan has been protesting the new dress code at Moperville North’s high school by wearing a male uniform. The lack of support that she received for her protest, even to the point where over half of her feminist club quit, has left her somewhat drained.[9]