From WikiFur, the furry encyclopedia.
Jump to: navigation, search
Lists > of characters > in comics > List of characters in Dog's Days of Summer

The following is a list of characters in the comic Dog's Days of Summer. 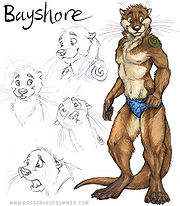 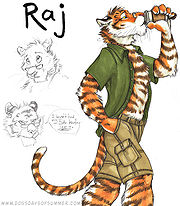 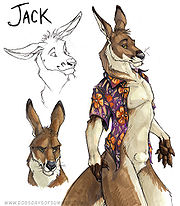 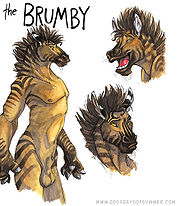 Character Sheet for The Brumby 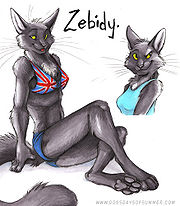 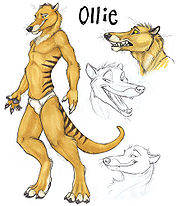 Diego is a dingo, a native of Australia. His father was a bush pilot who died in a plane crash when Diego was young, leaving him to be raised by his mother. He grew up with his good friend and neighbor Jack, the kangaroo. Diego went to college in southern California, where he earned his nickname “Diego” upon his return from the States. Now a days, he hangs around Bendigo Beach, enjoying the sun, the local Boomer Ale and the tourists.

Diego is laid back and likable, though he has trouble making up his mind and putting his life in a cohesive direction. He enjoys good company and finds himself attracted to both sexes, provided there’s a spark.

Bayshore is an otter from Minnesota, USA, who met Diego shortly after he arrived to Australia on vacation. They really hit it off--love at first sight, you could almost say. The two dated for a summer, until circumstances caused things to fall apart. Bayshore is a wide-eyed optimist with an innocent passion and a strong belief in love and life. He’s the youngest of the characters at 19 years old, which sometimes shows in his overeager enthusiasm. As an otter, he has a love for the water, would do anything for a finely cooked fish, and enjoys swimming and diving.

He got his koru tattoo the first time he traveled to New Zealand, to represent the start of his new life. He fell in love with New Zealand and someday wishes to immigrate.

Raj, short for Rajiv, is an Indo-Chinese tiger that originally came to Australia from Malaysia. He is a some-times college student studying architecture, currently between semesters. Raj took a spare job or two around Bendigo Beach to help with his tuition.

He’s somewhat of a player, enjoying sex and life and the thrill of being caught. He has a hard time understanding people who get tied down in monogamous relationships, as he has a voracious appetite for new, exciting and somewhat dangerous things. To help facilitate his all-nighter party attitude, Raj is addicted to strong coffee.

Like a true cat, he’s not afraid to show his claws if he can’t sink his teeth into what he wants.

Jack is a sarcastic, somewhat cynical red kangaroo. He’s a lifelong friend of Diego’s, as they grew up together in the bush. He originally came to visit Diego and took a liking to the laid back scene of Bendigo Beach. Now Jack works there part time, sharing a house with Diego and the Brumby. He enjoys a good beer, prefers coffee or tea, and is always ready to offer good advice and support when Diego is caught between a rock and a hard place.

The Brumby is a zorse (a zebra-horse hybrid.) The “Brumby” is his childhood nickname and his real name is currently unknown to all but Jack and Diego. His mother was a native Australian and his father was part of the military. The Brumby is a childhood friend of Jack and Diego, going through primary and secondary school with them. He is a ladies man, athletic, perhaps a little self absorbed, but will always be there to stand up for a friend. When he’s not on Bendigo Beach, he lives in downtown Sydney working on the ferry. He’s a true beach bum, sponging a room in the house with Diego and Jack, and spending his days sunbathing and hunting for shelias.

Zebidy, or Zeb for short, is a black cat from England, who arrived at Bendigo Beach as a tourist with the aim of getting as far away from her family as possible. Upon arrival, she accidentally met Diego, Jack and the Brumby and things progressed from there. She hooked up with the Brumby, (despite knowing her grand-kitten wanting mother would voice some loud complaints) and is making the most of her holiday down under. She’s traveled most of Europe and North America and knows how to take care of herself. Somewhat of a loner, she is a passionate jack of all trades. Zeb has had many odd-jobs in her travels, such as a blackjack dealer in a Las Vegas casino, a fencing instructor, a limo driver, a vineyard care-taker, and an English tutor to name a few.

Ollie is a thylacine, born in Hobart, Tasmania into a wealthy family. He rejected his pampered lifestyle and overbearing parents, and ran away from home at a young age to Melbourne, Australia. He scrimped a living as a busker, all the while enjoying the art scene and community. After a relationship turned sour, he needed another new start and moved north to Sydney briefly, then to Bendigo Beach where he is currently working as a waiter. He is determined to stay single and enjoy the fruits of his youth. He met Raj several years ago, and the two have enjoyed an on-again-off-again fling. They now treat each other as old friends and confidants, with the added bonus of the occasional friendly lay.