From WikiFur, the furry encyclopedia.
Jump to: navigation, search
Lists > of characters > in comics > List of characters in Citation Needed

This is a list of characters in the webcomic Citation Needed. 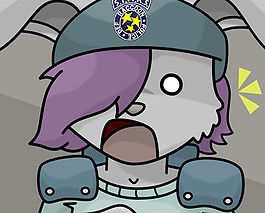 Jaxon Diablos is a parody of the typical overly cute furry web comic, and overly cute fursonas. The fact that he is a 4 foot 2 inch cute looking rabbit is highly contrasted by the fact that he swears in almost every sentence, threatens people with guns repeatedly, and both smokes and drinks heavily. While not disclosed in the current version of Citation Needed, in an earlier comic it was revealed that he is from the fictional country of Lavaria, a country closely resembling Germany in its flag, and language. He uses many types of gun with graceful ease and has killed various people, either through his own direct influence or indirectly by his actions. Such as his misunderstanding of the word shock (most likely due to his Lavarian decent) causes him to attempt to shock a zombie through words rather than literally with a make shift cattle prod. This caused Lieutenant Kirk (a clear parody of Captain Kirk from Star Trek) to be eaten alive (and presumably die although this act is not seen within the comic). Without his guns however he is very cowardly, and hides away from danger rather than facing it head on. 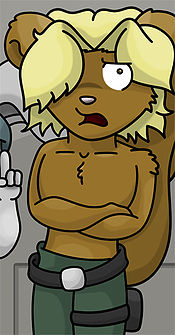 The second most drawn character in the comic series, and he doesn’t even have a name. It is unknown if people actually knows his name, and it has just never said it aloud in the comic so that the readers may know it as well, or if he even has a name at all. Allegedly, the reason as to why the long running joke of him not having a name arose was because in the script of an early version of Citation Needed he was just supposed to be an extra, and did not need a name, the designation “Nameless Squirrel” was used to save time making one up. After this the writer decided that he actually enjoyed drawing the character and so continued to include him in future episodes, never updating the name “Nameless Squirrel” from his script. He is Jaxon’s best friend who according to the character bios of an old website “passed out on Jaxon’s floor after a drunken party and simply never left” although this may be irrelevant now. He is by far the most mysterious character, as he doesn’t seem to be a parody of anything at all, and it has not been revealed who he is, what he does for a living, or where he actually came from. Either way he is still Jaxon’s best friend and is considered the secondary main character of the series. He hates wearing a shirt for an unexplained reason and has expressed this fact many times, he even removed a protective bullet proof vest while in a very dangerous environment simply because he dislikes shirts. On many occasions he is seen playing an Xbox360, although when played against Jaxon always beats him. Another interesting fact is that although some of the characters break the forth wall at times for the sake of comedy, Nameless seems to be constantly aware that he is in a comic. He once says to Jaxon that they should explain what they already know out loud simply so that the readers of the comic can also know what is currently going on. While Jaxon can’t understand why they should do this, and is confused that Nameless should suggest “readers”, Nameless seems to realise that Jaxon wont understand, and moves the subject on.

A cat tenant living in Jaxon’s boarding house, she is 24 and works as a cashier at a supermarket. She clearly hates this fact and has expressed her desire to move out, but the economy system in Goldvale would bankrupt her if she attempted to do so. She is a parody of the typical yiffy fur, mostly used in yiff stories found on websites such as Yiffstar. To express this fact she has very generic features and large breasts, as well as limited character depth. Despite this fact however her personality directly contrasts the cliché of the typical yiffy fur, she hates people calling her beautiful and turns down every jerk that comes onto her, with confident pride. This is again to express Jaxon’s belief that most cartoon animals would dislike the thought of being used for sex, and would not so easily submit. She is quite strong in various aspects, managing to throw an entire sink at Horatio when he invaded her home. She also punched out Amon shortly afterwards causing him to bleed from his mouth. She is based off of a furry Jaxon met on Furcadia at one point, adding her to the comic as a method of wooing her, however this plan failed. Nether the less, she has remained a character ever since her addition to the comic series. 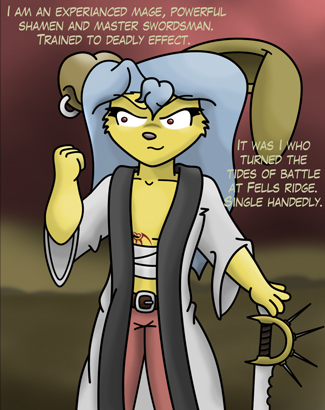 Horatio with his weapon of choice.

Horatio is based off of any typical member of the furry fandom who creates an overly developed and highly attractive fursona, then God Mods repeatedly to the point of annoying everyone around them. He is extremely vain, spending more time admiring his appearance and talking about how great he is rather than actually getting something done. Because of this he is by far the single most developed character in the history of Citation Needed. He also parodies members of the fandom who mix up hybrid fursona’s in an attempt to create an impressive character, but in the end look ridiculous for it. He has claimed to be a cat, bat, hawk, rat, rabbit, cabbit, snake, fox, bear, rhino, gryphon, dragon, banana slug hybrid. Even though to be part cat, rabbit, and cabbit, is an impossible fact, as a cabbit is already a cross between a rabbit and a cat. He originally had two tails, a fox and a dragon tail, however Jaxon removed the fox tail as it crowded Horatio and made him difficult to see, leading for his tail to disappear half way through the comic. He regularly speaks in Spanish but is not actually from Spain (as Spain does not exist in the world Citation Needed is set in), even though in one episode Jaxon writes down on a piece of paper that he is from Spain (this is supposed to be a word covered up and a hint towards the country he is based on, not actual fact,) In episode 26 it is revealed he is from the fictional village of Ina’Roth, a community that accepts all forms of species from around the world (and presumably demons and other creatures) who wish to live in peace rather than fight one another. Due to the large variety of species within the village interbreeding caused Horatio to pick up many different species traits when born. He however claims to be “Just an average being” (another link to DMFA) rather than a demon or other creature. He is presumed to be part Incubus, as he has a pair of small wings on the back of his head which he can hide at will, though they randomly appear and disappear between shots hinting to the fact that he has limited control over this ability. He is incredibly powerful in fighting, using a sword and magic rather than bullets. It was shown that he once even jumped inside a dragon’s mouth only to cleave his way out through the back of it’s head. Shortly afterwards the dragon exploded for no reason. 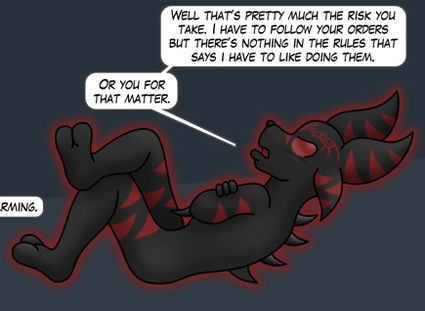 Amon explains his views on his life.

Amon was introduced in episode 22, he is a minion of Horatio that resembles a Jackal in appearance and possesses the powers similar to a Warp Aci. Unlike Warp Aci however he is the size of an average furry. Horatio has stated that he carved an ancient symbol into his chest to give Amon life, also like the web comic DMFA, as Incubus who control Warp Aci are linked through their clan marking and the symbol upon their Warp Aci’s head. Similarly, the same mark on Amon’s head is seen on Horatio’s chest on several occasions. Amon is a parody of horny members of the furry community who constantly think about yiff, as well as the subcultures which has arisen within the fandom, such as demons and vampires which are, apparently, now included as cartoon animals. To contrast this, despite Amon’s attempts to woo any female character, he is constantly rejected in a painful manner. Such as being punched out by Marie after his rather crude pick up line. In the same episode it is also revealed that he does not have a penis. He very seems to be bitter about this fact and constantly thinks about it, as the word “dick” seems to constantly slip into mostly everything he says. He also seems to bleed a highly concentrated form of acid or plasma, as after being punched by Marie a drop of what is assumed to be his life essence came from his mouth, then shortly after in the next panel a smouldering hole can be seen in the wall next to him with trace amounts of this liquid dripping down from it. 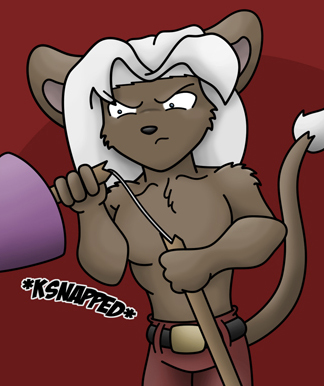 Khan snaps a lamp in half.

Introduced in episode 19, Khan is a parody of the character of the same name from the Star Trek movie, the Wrath of Khan. Whilst not very detailed in character history or depth as of yet, Jaxon has stated that he will be included as a main character in later comics. Khan seems to be very adapt in survival, managing to form a cattle prod from a lamp within a matter of seconds. He also, like Nameless, does not wear a shirt, however this is most likely due to coincidence in order to parody his likeness to the Star Trek version of Khan rather than the fact that he does not like them.

A worker in the same shop as Marie. He is an eerie cat shadow like character surrounded by a constant aura of crimson red light, however despite this he is a generally nice guy who gives great relationship advice. Despite his evil appearance everyone treats him as a normal person, except for Brian, who seems to be the only one who notices this.

Another worker in the same shop as Marie, he is a yellow furred rabbit with large spiky black hair. He has no noticeable traits apart from the fact that he is the only one who seems to notice Craig’s evil appearance.

A black cat with black hair who works in the same shop as Marie, most likely a puma although when drawn Jaxon’s drawing ability was too lacking for this to be apparent.

Literally a furry version of Albert Wesker from the Resident Evil series. He is only seen in episode 18, and then again in episode 21 as a image of memory, and has never said any lines. He is portrayed as a cat, most likely due to Wesker’s affinity with cats in the actual series. His fur is unique in the fact that it varies from brown, to black with blue stripes in patches.

An anthro version of Barry Burton from the Resident Evil series, he is portrayed as a small skinny canine with large ears, most likely a Fennec. He almost never speaks in a normal way, mixing up words to form sentences that closely resemble what he is trying to say, a direct parody of the poor translation from the Japanese to American versions of Resident Evil.

A parody of Captain Kirk from Star Trek. He wears the same uniform from the series and is portrayed as a cat. Just like the fictional character, he pauses frequently while speaking. He was killed off-screen between episodes 28 and 32 after being “eaten alive” by a zombie.