From WikiFur, the furry encyclopedia.
Jump to: navigation, search
Lists > of characters > in comics > List of characters in Badly Drawn Kitties

The following is a list of characters in the webcomic Badly Drawn Kitties. 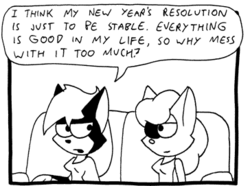 A black cat with white hair, Lucy Koneko is the main character of the strip, with many of the stories dealing with her sexual romps and relationships. She is bisexual, but is mostly lesbian. So far she has been in relationships with her one-time boss Zig Zag; an incestuous relationship with her brother Fisk; and is currently dating a co-worker, Jezzebel. She has routinely tried to get her roommate Lydia to have sex with her, but she refuses; Lucy has since stopped trying due to Lydia's relationship with Dirk, and her own with Jezzebel.

She has lived in New Talia for the last few years after moving from Atlanta, Georgia; and currently works as an editor for Sonica, a music magazine. She originally worked there as their harshest, most vicious music critic; Lucy also composed music for some of Zig Zag's movies, wrote songs and produced an album for a band, and even appeared as a professional wrestler's on-air girlfriend. 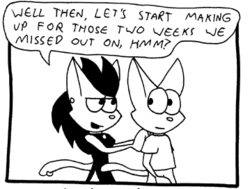 A white cat with black hair, and Lucy's childhood friend, she works at the White Cat tattoo, fur dying and body piercing parlor. Lydia is originally from Atlanta, and followed Lucy to New Talia where they share an apartment. Lydia is totally straight—although she once thought she might have been bisexual—and resists Lucy's come-ons. It's at work that she met her boyfriend, Dirk who was in getting a body piercing. On October 18, 2004, Dirk asked her to marry him, and on August 31, 2005, they were married.

Dirk is a male cat who came into Lydia's parlor for some body piercing, specifically his scrotum; when Lydia saw his "equipment", she was immediately enamored by him. He currently runs his own music store. During the New Talian Idol incident, Lydia and Dirk got in a fight when Lucy tried to use him to get some of her co-workers off her back, but things got a little too comfy, and Lydia got a little too jealous. After a while, they got back together. They married on August 31, 2005. Jay Naylor came up with the name Dirk Savagewood, because it sounded like a good name for a porn actor.

Fisk is Lucy's twin brother, and they have been in an incestuous relationship since before they came to New Talia. At first Fisk worked as a security guard for Zig Zag, but after a while, moved back to the U.S. and joined the army, following in his father's footsteps. Sadly, Fisk also followed his father's footsteps right into his grave; his father died in the Vietnam War, and Fisk was killed in Iraq.

Fisk was created by Jay Naylor, and was friends with Mat for a time; so Fisk was included in BDK, while Lucy appears in Jay's comic, Better Days. The two had a falling out, which would explain Fisk's lack of presence in the comic, and his death. Lucy still appears in Better Days.

A bat with one eye; she is Fisk's former girlfriend, and now Lucy's girlfriend. Lucy first meets Jezzebel when they are buying birthday presents for Fisk; at said party, they are formally introduced. When Fisk gets drunk, Lucy offers Jezzebel a ride home, one thing led to another, and Lucy woke up in Jezzebel's bed. Shortly after Lucy returned to Sonica, Jezzebel and Lucy started dating. She works in Sonica's mail room.

A skunk with a distinctive tiger-stripe pattern, Zig Zag is the owner and star of Double Z Studios, an adult film studio, and is the creation of Max Black Rabbit. For a while she and Lucy dated. With both of them being almost totally promiscuous, it seemed like a perfect match; even though Lucy still made out with Fisk, and Zig Zag still made out with almost anybody with a pulse. When Lucy lost her job at Sonica over the New Talian Idol incident, Zig Zag offered her a job composing music for her movies. After Lucy was rehired at Sonica, the two have drifted apart. They are still friends but are no longer dating; Lucy says it's because of Zig Zag's eye for Double Z's web mistress.

A black cat who was once Lucy's boss at Sonica. She was the one who pegged Lucy for the host position on New Talian Idol, and she received a hairspray enema for her trouble. When Lucy was rehired at Sonica, Desi was demoted for causing the whole mess, and Lucy was now her boss. It was too much for Desi, and later on she quit. Desi now hosts New Talian Idol.

Dirk's parents show up just in time for his and Lydia's wedding. They are divorced, and it seems they are not from North America—or at least his father isn't—as there is a reference to "football" being the same as "soccer". Dirk's father's name is Kirk, and his mother's name is Carol.

Dirk's sister, who has been in England for the last five years. When Lucy tried to get Dirk and Lydia back together, she found him with another woman, not knowing that it was his sister. Unlike Lucy and Fisk, there is nothing more to their relationship. 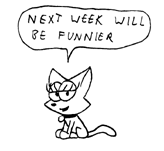 A cat who appears every now and then when Mat can't come up with a good way to end a comic, usually by making some random comment on the current goings on, or doing something completely irrelevant; as such, she often talks to the audience directly, breaking the fourth wall. Unlike the other characters, Lola takes the shape of a normal cat.

One time when Mat was feeling down, Amber, creator of Dan and Mab's Furry Adventures kidnapped Lola and threatened to change her into a succubus if Mat didn't pay her a ransom of jellybeans, but no licorice ones. Lucy's answer was to kidnap all of DMFA's mows, which proved disastrous, and Amber turned Lola into a succubus. She is now promising much revenge on Mat.

Succubus Lola makes an appearance in DMFA in the background of comic #512. 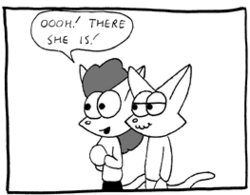 Lydia takes very much after her mother, right down to their inability to drink alcohol—both get drunk whenever the slightest bit touches their lips. Ironically, Lydia's father looks like an older version of Dirk, although this could be the result of Mat's simplistic art style leaving little room for character variation. Lydia's mother's name is Delia, while her father's name was recently retconned to "Charles"; it was originally given as "Albert".

The author of the comic. Mat inserts himself occasionally when there is need to talk about the direction the comic is going. In real life, Mat works at a Pizza Hut, loves music, and was a professional wrestling fan, though horribly disappointed by it now. Mat isn't really a part of the comic continuity, and like Lola, often breaks the fourth wall, speaking to the audience directly.

A friend of Dirk's who works at his record store. He's also Sally's boyfriend.

A heavily tattooed woman who works with Lydia. In a Halloween strip, it is revealed she is actually a carnivorous demon from the depths of Hell. It's unknown if her boyfriend Nikashi knows.

Lucy and Fisk's mother, she has appeared frequently through the comic. Even though she often asks Lucy if she's got a boyfriend, she suspects that her daughter is gay; she accepts her daughter is bisexual, but Sheila hopes that Lucy will at least get a boyfriend and mother a child at some point.

A pet ferret that Lucy bought Lydia during her break-up with Dirk. Lydia named her Snow (short for Snowball) because her fur is completely white, a la Snow White.

The president of Ranntech, he is a billionaire who bought Sonica magazine. Shortly after, he tried to sue Lucy for $1.5 million for damages related to the New Talian Idol incident. Lucy counter sued, forcing an out of court settlement. Rann didn't like that he had to bow down at all and has tried various schemes to make her life a living hell.