Liphx is the fursona and alias of a furry artist. 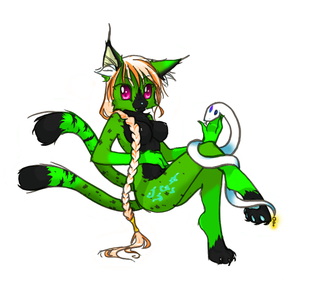 Liphx De Saide is a twin-tailed felis chaus, obviously not of a natural hue, her fur an emerald coat with brighter versions on her paws as "gloves" and below her knees. She also has a joint of black patches, the most prominent being on her chest, muzzle, ear tips, tufts "socks" and her tail tips, she also has spots scattered about on her rear and lower back. Her eyes are a bright hot pink which are illuminating after dark, her paw pads on her feet are a unique sky blue, along with her nose being the same color. The same sky blue coloring is also on her left thigh, which displays an usual set of markings. Her full standing height is roughly 5'1 (including her ear tips) her weight is 103lbs. She is normally nude (98% of the time), mostly due to her upbringing and a somewhat unique mindset.

Liphx's beginning was not by any means normal or natural. On an uncharted island in the seclusion of the South Pacific Ocean a horrid experiment and massive operation was interfering with Mother nature. In the early times of 2012, obsessive lovers of a popular "furry fandom" began immersing themselves in genetic mutation studies and experiments. Due to a massive world war between 2012 until 2058 the lands became unbalanced, some thrived on technologic advancement, while other plummeted into primitive states. While the Northern parts of the world leaned more on the technologic living, the south hinted on primitive. Keeping strictly to their places, the two rarely conflicted with each other. The North is the leading distributor of HAC creations, commonly abbreviated for Human Altered Creations, they 'create' the furries of this world.

Liphx's time of 'birth' is 2069, she was created personally for a rich slaver whom specialized in the breeding and selling of exotic slaves and persons. While furrs are openly created, not all are accepting of them, nor are they welcomed. When a human enraged riot broke out on the HAC Headquarters, countless anthropomorphic beings managed to escape. This is how Liphx came to be 'born', her approximate age of being broken out of her life sustaining liquid module would be around the higher teenage years. Due to her patrons personal requests for her personality and habits, she had a natural ease into the feral lively hood.

Since the destruction of the main HAC establishment, the agents have vigorously searching and re-capturing the escapees, whom have since created their own societies and groups, one of the most popular being set for the Destruction of all human-created furs. The second most popular being the exact opposite, and being able to live alongside their human-made counterparts. All furs have the female-male reproductive systems of the homosapien species and can just as easily reproduce in the wild.

A lively girl she is more or less a feral fur, she does not wear clothes for that reason, though, on occasion she has been known to wear some for decency issues, she still has manners! She hones no abnormal abilities, only the keen eyesight and hearing is naturally blessed with. She tends to be devious and salacious, though not to obscene or grotesque measures. She is bisexual and has no preference, her major turn ons from a male point would be scaled creatures or those with tentacles. Her female tastes would be on the feline side.

She is Not all female, Liphx has one unique ability to change her sex at will. her female form is a twin tailed felis chaus, while her male form is a canine. The two are ""not"" mixed, she is not a herm. Either she is in female ""Liphx"" form, or male ""Lipho"" form. The transformation takes approx. ten minutes to complete and is only possible while she is asleep. After being changed she must wait thirteen hours before being able to switch back into her other sex or she may become unstable.

She also has an obsessive love for Sour cream and sadly her one major weak spot. Her traveling companions consist of Nixle, Filenro and Jux. Their purpose is hidden in my personal stories for her and them. 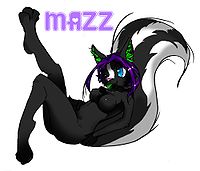 Commission of Mazz as drawn by Liphx.

Liphx is also the alias of her human person, though fur at heart, she is a happy artist who enjoys drawing and accepting request always free of charge. Some of her works can be previewed at her new FurAffinity profile or by requesting her for some samples. Her three drawing styles are as follow:

Each style is different by body anatomy and the 4th being the commissioners choice on how the style should lean towards.

Tools of the trade I only used mechanical pencils for sketching and finish with an inking from a Faber-Castell PITT artist pen. Although I'd want a tablet, it hasn't happened.

For traditional by hand coloring I use a regular commercial bought Crayola 12-set Colored pencils, if I use markers, it is a larger Roseart set. For digital drawing, I mainly use PhotoShop CS3 Extended or Adobe Fireworks, the program paint.NET is always used for minor tweaking of the finished versions. 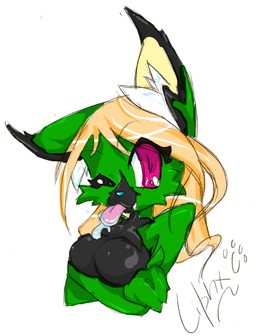 Liphx is particularly active in the popular Furtopia IRC and FA website.