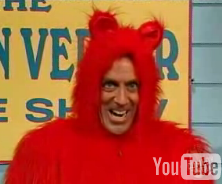 The Lillian Verner Game Show is a fictional game show occasionally presented as part of Comedy Central's MADtv, a comedic television show. During season ten, episode #1020 (first broadcast 30 April 2005) of the show included a "plushie" (wearing a fluffy red mouse fursuit) as one of the contestants.

At 2:20 into the sketch, the second contestant is introduced:

Kirby also gets a question wrong, and at the end of the show he links up with Simeon.