This is an article about the species. For topics that share the name, see Liger (disambiguation) 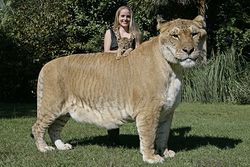 A liger is a hybrid species resulting from the mating of a male lion to a female tiger. The offspring is generally much larger than either of the parents, averaging a weight of 900 to 1000 lbs, with some individuals known to weigh as much as 1500 lbs without being significantly overweight.

A related animal is the tigon, which is the offspring of a female lion and a male tiger.

Ligers generally possess a combination of traits from both parents, appearing as a clear mix between a lion and a tiger. Males often possess a mane, while both males and females bear brownish stripes along their otherwise tawny body and face. They only exist in captivity because the territories of its two species don't overlap in the wild.

It is sometimes stated by scientists that the liger resembles what the pre-historic large cats known as the European cave lion and American lion had looked like, in both stature and pelage. These species of large cat went extinct approximately 10,000 years ago and are credited to be direct ancestors to both modern lions and tigers.