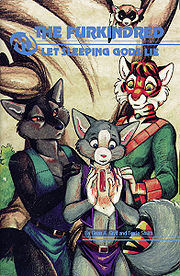 Let Sleeping Gods Lie is a graphic novel set in The Furkindred shared universe. Published in February 1997, Let Sleeping Gods Lie was "co-plotted" and written by Dean Graf, and co-plotted and drawn by Terrie Smith. It features the adventures of the characters Ian and Morgan. This pair were originally a pair of adventurers who ran into trouble during a shared astral projection; they found themselves placed in the bodies of two mystically lobotomized prisoners in another world.