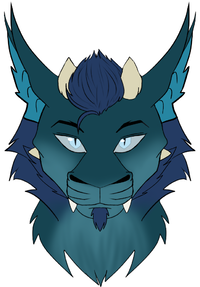 Leo Elstar (Russian: Лео Элстар; born August 27, 1992) is an artist, fursuiter, fursuit maker and translator who lives in Odessa, Ukraine. He joined the furry fandom in 2013.

Leo began his creative efforts in 1998, when, by chance, he got into an artistic circle. Since 2003 he drew only Sonic fandom characters. In 2013 he changed his artwork style and began drawing furry characters as well.

Same year, Leo began work on his first fursuit, which he completed in half a year. This first fursuit was experimental and not intended as something serious. Since 2015, Leo has been building fursuits constantly, making this hobby his job.

Leo's fursona is Elstar the chimera, a hybrid mostly of dragon and cat, with 10% not disclosed. Sometimes he is depicted with wings. Leo has spikes on his shoulders, back and deltas. They are a means of protection from the contact with the environment, and also help to show his emotional state. When he is experiencing negative emotions, the spikes harden, whilst positive emotions cause them to soften and degrade. Hence he can cuddle others without doing them harm. When communicating, he uses a mixture of voice, cat sounds and a whistle.

Leo first appeared in Tsukinni, green-blue cat partial fursuit which now is called Murphy and belongs to Jaxen Beaver. Later in 2016 he had panda partial fursuit. Finally at rusfurence in 2017 Leo debuted in his fursona fursuit. Though he plans to make updated version of himself with fullbody suit soon.

Since 2014, he has been conducting workshops on crafting topics in exchange for free access to events.

Unbeknownst to all, he visited the hotel during WUFF in 2014, but remained unnoticed. In 2015 and 2016, he participated in WUFF as one on the team of translators.

Attended rusfurence and WUFF in 2017.