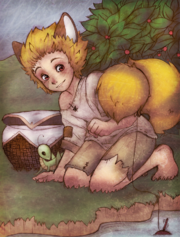 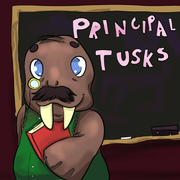 Finn Tusks, as drawn by Scribble-Scrabble

Lem Ahnayd, also known as Finn Tusks and Libidinous Wonder, formerly Sesame Bun (born February 16, 1986), is a former furry artist and current writer and cub who lived in Kentucky, USA, with his wife Aspen Tree and son. His interests lie in Japanese culture, anime, UTAU, role play, and content development. The majority of his characters are kemonomimi.

Lem Ahnayd is the owner and head admin/principal/creator of Little Paws Elementary School [1]. He came up with the idea for the website, made the first and second designs, and registered it on October 12, 2013 [2]. He participates on the website as Finn Tusks,[[3] who is both an unofficial mascot and character created for that purpose.

On January 27th, 2016, the man behind Lem, Sesame, Finn, and other memorable characters passed away suddenly due to seizure related medical problems. He was only 30.