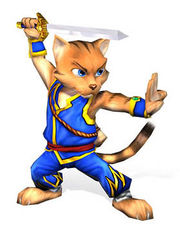 Legend of Kay is a video game for the PlayStation 2 developed in Germany by Neon Studios/JoWooD Productions and released on September 20th, 2005 by Capcom. The game takes place on the Island of Yenching where the harmony of the cat, frog, rabbit, and panda tribes is broken by an invading army of gorillas and rats. Kay is a young cat training in martial arts who rises to the challenge of restoring peace to the island. Legend of Kay combines action and platforming in a style similar to The Legend of Zelda, with the addition of fighter-style combo moves in keeping with the martial arts theme.

The game features a cast entirely of anthropomorphic animals and even an opening cut scene in comic book style.

A visually remastered version of the game, featuring online leaderboards for player score and boar/wolf race times, was released on July 28th, 2015 under the name Legend of Kay: Anniversary for PC, Mac, PS4, and the Nintendo Wii U. The credits in this version of the game end with the message "We'll be back!", leading some fans to believe that Nordic Games, the new owners of the Legend of Kay IP, intend to make a sequel.