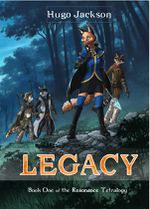 Legacy is a young adult fantasy novel by Hugo Jackson, first self-published on Amazon Kindle in November 2012, then published by Inspired Quill in paperback and re-released on Kindle in September 2013. The cover illustrations are by Minna Sundberg. It is the first in a series of four books, known collectively as The Resonance Tetralogy.

The story follows Faria Phiraco, a seventeen year-old red fox, as she escapes from her city chased by dragons trying to uncover secrets of the lost city of Nazreal.

Her power is unmeasured. Her abilities untested. Her destiny inescapable. Faria Phiraco is a resonator, a manipulator of the elements via rare crystals. It is an extraordinary and secret power which she and her father, the Emperor of Xayall, guard with their lives. The Dhraka, malicious red-scaled dragons, have discovered an ancient artefact; a mysterious relic from the mythical, aeons-lost city of Nazreal. With their plan already set in motion, they besiege Xayall, pummelling the city to find Faria and rip more of Nazreal's secrets from her. When her father goes missing, Faria has to rely on her own strength to brave the world that attacks her at every turn. Friends and guardians rally by her to help save her father and reveal the mysteries of the ruined city, while the dark legacy of an ancient cataclysm wraps its claws around her fate... and her past. She soon realises that this is not the beginning, nor anywhere near the end. A titanic war spanning thousands of years unfolds around her, one that could yet cost the lives of everyone on Eeres.

The story, being focused on a young adult audience, contains no erotica, and primarily focuses on action and character development. Although heavily based in a quasi-medieval fantasy setting, it also contains elements of science fiction and steampunk.