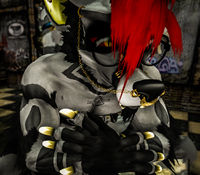 Lazew Diu is a Crux from a non official colors from the original V2 Crux. He is of the gray and black(markings) with a lot of froofies. He has a mix of horse, feline and dog into his DNA string among the crux's precious DNA. He is Crux on the outside but a tentacle nightmare from the inside. Playful, likes crude bitter humor, can take jokes quite well, loves to tinker around with anything electrical. May not appear bright at first sight, a wise talk will turn your opinions into dust. Loves the horror and macabre, can be a bit sad but usually gets happy real quick and remain that way for a good while. As lovable as he might be he also gets the occasional encounters with the people who judge others by their cover. Making him not the most approached character amongst cruxes. Attached to his tail, is a sealed anti-matter. on his chest, is an old chaos theory symbol.

Lazew is a tech hobbyist, enthusiast of artistic photography. He also creates illbiant/drone/dark ambient music. A bit of a MacGuyver minded type of guy. He grew in rural area all his childhood but preferred the city life over the tranquility. 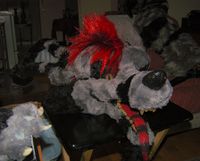 Lazew's Crux Fursuit head and the rest of his suit in progress.

Lazew took it upon himself to build his own fursuit from a recycled sofa chair. He isn't sure where the fursuit life will bring him in the near future yet. At this moment there are no complete photos of his fursuit. Once he will be done building it a full figure picture will be posted.