The half-hour-long show premiered on Sunday, April 27, 2014, on HBO. Last Week Tonight shares some similarities with Comedy Central's The Daily Show (where Oliver was previously featured as a correspondent and fill-in host), as it takes a satirical look at news, politics and current events, but on a weekly basis. 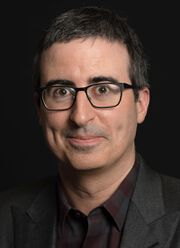 There are various elements in the series of interest to furries. The show's theme song starts off every episode containing images relating the world at large (with one or more related to that episode) with satirical captions written in dog Latin.

A reoccurring element of the show is Oliver's use of mascots. The mascots used in the show include Jeff the Diseased Lung in a Cowboy Hat, Hoots the NSA Owl, Taryn the Tinder Chicken, and the Last Week Tonight puppets.[1] Oliver told Vulture in February of 2019:

In "Retirement Plans" segment: at 10min6sec point] "The Cat of Wall Street" image is shown (image edit combining The Wolf of Wall Street (2013 film) movie poster of with face of Orlando the stock-picking cat) instead of Leonardo DiCaprio's head and cat paws instead of Leo's hands... resulting in a cat anthro).

During the information on President Donald Trump's message of "Fire and fury" to North Korea, John brings up the typo on the Kennebec Journal's front page quoting "Fire and Furry" from the president. John reacts to this by saying, "Fire and fury! The only way that is not terrifying, is if you report it like one newspaper actually did in Maine (the newspaper in reference is the Kennebec Journal) saying 'Trump warns of fire and furry' in which case, Trump is threatening to send this to North Korea, which is a very different kinda of threat.". This, a fox and chicken photo from Furry Kama Sutra, was shown on screen and to the audience.

While talking about YouTube (starting at 27minutes into the episode) John briefly talks about inflatable Tyrannosaurus (T-Rex) costumes, while some video clips play of T-Rex costumes on dirtbikes, ballet dancing, exercising and "car repair". And for the closing segment, a bunch of people went on stage including some T-Rex costumes.

Segments at the start: followup to season4 segment about Coal and the series (Last Week Tonight) being sued by Bob Murray for defamation. The judge said he was planning to dismiss the lawsuit, and then giant squirrel Mr. Nutterbutter showed up and displayed a sign that said: "Eat Shit, Bob!" Mr. Nutterbutter also did gestures and costume emoting.

(during a segment about cryptocurrencies):

John highlights that many furries "offer art commissions, where you can get yourself done up as sexy river otter at very reasonable prices" while showing a picture of himself done up as just that

The show's production has also created content specifically for furry fan use.[citation needed] For the March 19, 2017, episode, which reported on Bolivia's growing coalition of workers clad in zebra suits to educate civilians about traffic laws, the show's production recorded 23 minutes of a person in a zebra costume dancing and gesticulating before a green screen so that viewers could edit it into other videos for humorous effect.[3]

A similar video called "Real Animals, Fake Paws" for use in reenacting U.S. Supreme Court cases was released after the October 19, 2014, episode where dogs were used instead of justices to make listening to oral court cases more amusing to the general public and to increase interest in the subject.[4]

A Day in the Life of Marlon Bundo[edit] 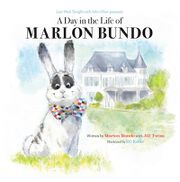 A Day in the Life of Marlon Bundo, cover by illustrator Gerald Kelley.

On March 18, 2018, Oliver announced the publication of a children's book, A Day in the Life of Marlon Bundo, which parodies a book that Mike Pence's family wrote about their family rabbit, Marlon Bundo's A Day in the Life of the Vice President. Oliver used his book as a platform to criticize Pence's positions on LGBT issues, as it featured a rabbit in a same-sex relationship.[5] The book became the number-one book and e-book on Amazon the next day, and the top-selling audiobook on Audible.[6][7]