Last Res0rt is a cyberpunk, furry webcomic by Rachel Keslensky, featuring the furry alien violinist Jigsaw Forte who signs up for a deadly reality show before discovering that she's transformed into a rare nonhuman vampire (and now must hide this fact to prevent being hunted down by more than just the other players).

The comic updates weekly on Sundays in full-color, full-page format.

The comic contains many furry characters as various alien species; although several of them appear to be more typical creatures, none of the furry species involved represent actual animals on Earth. 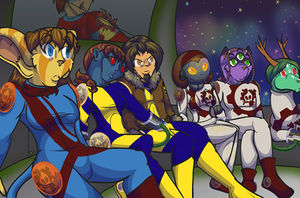 The reality show Last Res0rt has just begun, with a simple premise in mind; Twelve criminals, condemned or otherwise sentenced to life in prison, have offered to play on the show in hopes of earning a pardon at the end of the season.

This, of course, makes the assumption that they will live long enough to collect; all they have to do in order to win is survive the show's several challenges (and presumably avoid taking out each other in the process) until the season finale. So far no indication has been made as to how many can survive, so it's entirely possible (but highly unlikely) for all twelve criminals to be freed if they can work together long enough.

Several volunteer players are also in the mix, designed to help keep the criminals in check as well as offering some to-be-expected drama and fanbase for the show in case none of the criminals manage to win over viewers.

The main plot of Last Res0rt focuses on one of the volunteers, Jigsaw Forte, along with several of the criminal players she crosses paths with (some of whom are more dangerous than others) as they progress through the show's premier season.

There are several subplots, including:

The main location for much of the comic (or at least the present-day elements). Mostly completed, but with some of the interior still under construction.

Slick's and Jigsaw's home planet, mostly populated by Talmi. Jigsaw's siblings Slider and Sudoku are in school on this planet while their parents (Cypher and Meridian) leave from here in search of Jigsaw.

Alice Quinn's assumed home planet, which she considers to be run by "wingies" (Celeste) who have a tyrannical rule over the world. (Of course, considering who's telling us this, there's no proof that what she's saying is true.)

Also the home planet of First Wing Veled, as well as several other Celeste.

Celigo has hostile relations with Nurovidia, and constantly accuse the planet of sending spies to infiltrate their government and terrorize Celigan citizens.

Golden Braun's home planet, mostly populated by Vidians. Nurovidia has had hostile relations with Celigo for some time, especially over the handling of Arikos, a Celeste criminal who was in political limbo prior to the show. 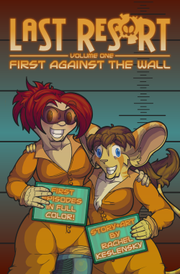 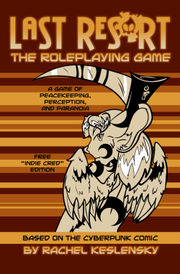 The cover of the free eBook version of Last Res0rt: the Roleplaying Game, a companion role-playing game for the series.

Two books are available about Last Res0rt so far: