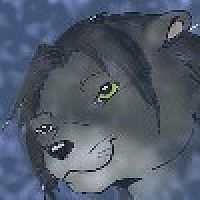 Lascivus Lutra is an anthropomorphic river otter that morphed from the human form in the fall of 2003. The furry name comes from the Latin, lascivus meaning playful and lutra meaning otter. It is pronounced las-ki-woos loo-tra, but call him Las. He discovered the furry fandom through the infamous CSI episode "Fur and Loathing".

Lascivus Lutra is indigenous to NEOFurs and can often be seen sunning at the forums or playing with other furries. He is an omnivore but has a strong liking to giant orange Pixy Stix. He is a pirate and a member of Stuck In The Elevator club.

Las dabbles in art and poetry, but has found a fondness for creating fursuits. He has volunteered at a couple of furry conventions, hosted a few panels. This otter joined the staff of Western Pennsylvania Furry Weekend, as Security Chief. Las performed in Flamez the otter at the 2007 Wooley Bear Parade in Vermillion, OH and in the Amherst Holiday Parade in Amherst, OH.