Las Lindas is a webcomic created by Chalo in El Salvador, partially written by SoulKat in California, with assistance and additional writing by ID from Kentucky. Hosted since its inception on The Katbox, Las Lindas updates on a weekly update schedule. In March of 2013, it crossed the 400-page mark.[1] There are also a number of bonus comics set in the same universe. 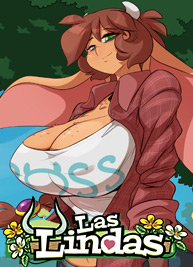 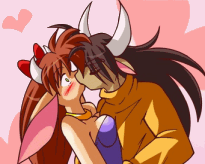 Minos surprises Mora with a kiss.

Mora Linda, a cow. At the start of the comic, Mora is the owner and sole occupant of Las Lindas, the family farm. Frustrated with her inability to keep up with work, she goes into town in search of workers, thus beginning the story.

Miles Lionheart, a cat. Mora meets Miles in a bar, and he agrees to work for her, believing she runs a brothel or something similar. But Miles discovers soon enough that he had been hired for farm labor, while Mora discovers that Miles tends toward laziness if not properly motivated.

Minos, a bull. Minos has a mysterious background and doesn't talk much. He is incredibly strong but also calm at heart.

Ria "Taffy" Rudiger, a cocktail waitress bunny whom he had met previously. Still unable to run the farm on her own, Mora tries to patch things up with Minos, but he is only willing to return if she rehires Miles as well, who in turn asks that she hire Taffy. Mora agrees, and Taffy soon establishes herself as the peacemaker of the group.

Idward Focks, an Arctic fox whom Mora had dated previously. Idward still holds a candle for Mora but she can't stand him, and Miles becomes annoyed when it looks as though he also has his sights on Taffy. United by a common enemy, Mora and Miles work together to hatch and pull off a plot to get rid of Idward by mailing him to Aruba.

Sarah Silkie and Rachael Saleigh, both cats, are runaway orphans who arrive at the farm. The energetic, childlike Sarah, and the more serious big-sister figure Rachael had been living by their wits for some time before arriving at Las Lindas. After a couple of failed attempts to improve their lot at the expense of the farm, the two of them agree to play it straight and stay on board.

Ambar is the High Prime of Neo Earth. She first appears before the Harvest Festival to break up another fight between Alej and Mora, at the request of Minos. Afterwards, she sits down with Sarah and tells the background story of Neo Earth. She gives Mora a golden arm band and leaves without explaining it. She reappears at the Harvest Festival as the host, but has not appeared in Las Lindas itself since then, though she is in some of the side comics.

Digit is the Resident Spirit of the Las Lindas farm. She appeared when Mora activated the armband. In the beginning she had a lot of trouble fitting in. It seemed whenever she tried to help someone, she hurt them. After gaining trust from and bonding with Mora, she received her "Interphase Terminals" which helped her better apologize for her accidents.

Alejandra “Patches” Coldthorn In Building an Empire, Alej was an eager intern gleefully anticipating her acceptance into senior management at Alexandria Machines until the vice president selected his daughter over her. With no other options left, she reluctantly accepted the management position over the Research and Development. Despite her serious demeanor, she’s opened enough to invite Tootsie in as her new friend. Her design for revenge against the company reaches its pinnacle during a presentation with Scarlet in which she was openly criticized for only achieving the minimum requirements. Her callous nature is shown when she received the news of Javier’s, her father, passing. Raised in poverty due in part to her father’s cautious nature, she learned to appreciate wealth and respected those individuals as entrepreneurs. She refused the offer to sell the land to prove to her father how profitable the land could be. Her loan nearly failed due to Scarlet’s appearance but was averted thanks to Bruce substituting her at the meeting. With the funding acquired, she continues on with her day job while slowly working towards her new business venture. Her recreational activities include shooting.

In Simpler Times, Alej was Mora and Randal’s childhood friend. Due to her rather cautious and subtle nature, she was often seen as the follower in Mora’s plans.

Tootsie In Building an Empire, Tootsie was and still is an incredibly talented engineer that has designed quite an arsenal of robotic devices. With an incredibly bubbly personality, she is more than eager to join Alej in her quest to start her own company and offered her skills in cracking Scarlet’s computer.

Chalo is the artist behind Las Lindas and its associated side comics. Many of the characters that appear in the comics predate them, and can be seen in the archives of Chalo's DeviantArt[3]

SoulKat is a co-writer for Las Lindas and was also a site administrator for The Katbox, its host.

ID is a former co-writer. He created a recurring character in the story, Idward.