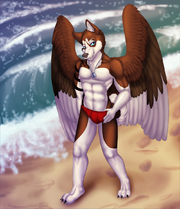 Lareth was raised in a family full of assassins. Lareth father made lareth and his brother Hisao Inuzuka start there training at the age of 5. At the age of 6 Lareth's mother (Who was an angel) and father died protecting them from an enemy attack at there family home. His father and mother worked for Sigma PMC and lead there own team of assassins. Lareth's father was the lead and his mother where 2nd in command. Sigma PMC is housed under the FBI and Lareth's parents healed the rank of Special Agent in charge. Lareth's mother was more of the information gatherer of the group.

After his parents died he was on his own. His brother was kidnapped and was unable to be found by lareth. Lareth keep training as hard as he could and at the age of 17 we was an expert in Weapons of all kind from guns to knives to swords. He joined a class go get his weapons specialist certification and graduated top of his class earning the level and rank or 1A or level 1 rank A witch is the highest ranking ale level you can get. When lareth turned 18 he applied to join the FBI as an agent.. During the testing Lareth scored the highest in marksmanship and fighting ever in the bureau. Lareth was hired as the lead of his fathers old team.

Outside of his job and training lareth is a kind hatred individual. He can be overprotective of the ones he loves the most. He is the kind of person that loves to help anyone in need and will never give up on that person. He also can be pretty cocky and very seductive at times.

Sigma PMC is a group of highly classed and highly trained assassins housed under the FBI. They take out any one that is a huge threat to national security- or the security of an american on and off of US soil. They take there assignments directly from the president of the united states and or the Director of the FBI. The President of the united states and the Director of the FBI are the only 2 outside of the group that know the true rank of all the members. To everyone else lareth is the Special Agent in charge of one of the FBI tactical team and the rest of his team is the tactical team.

Ranking from highest to lowest [edit]