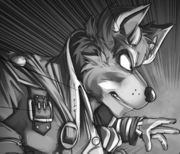 Lappie has been involved in the furry fandom for over 8 years and was a regular attendee of the London furmeets between 2005 and 2007. From 2008 onwards he was involved in the midfurs community after moving to Leicester to study at Brooksby Melton College. Whilst in Leicester Lappie lived with his former fiance Bucky, Ressie and Kibs. Since moving back to Edgware in 2011 he has once again become a regular at the London meets, and can quite often be found at the East Fur meets in Norwich.

Lappie's name is derived from the Russian word Lapushka, which means 'Little Paw'.

Lappie attended Brooksby Melton college in Leicestershire and holds a professional qualification in Animal Management and Welfare. Until recently he worked at dog and cat rehoming shelter in Edgware. He now works in the administration department of his local doctor's surgery.

Lappie has a strong interest in extreme sports and is a keen long-boarder, downhill mountain biker, and skateboarder. He has a great interest in the Warhammer game and model series and is an extremely skilled model painter whose art has been featured on various forums and websites. He is also an avid motor racing fan.