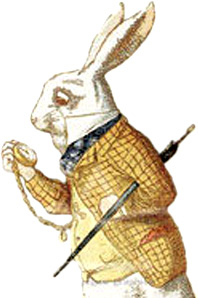 Lapism is a belief system created in the stories of Phil Geusz. It is described as a religion followed by a small but growing number of people on twenty-first century Earth. The most obvious feature of Lapists is that many of them have undergone a physical transformation through genetic engineering to resemble anthropomorphic rabbits.

Within the context of the stories, Lapism was founded in the twenty-first century by Dr. Thomas Aaron, a master "gengineer" (genetic engineer) who underwent radical alteration to become an anthropomorphic rabbit. He had multiple motives: to regenerate his ailing body, to use a masterpiece body design that would otherwise have been wasted, and to help himself become a better person through emulating rabbits' reputation for peace and kindness. He found that the transformation had a profound effect on him, and ultimately published a document known as the Book of Peace describing his moral insights.

Aaron changed his name to "Sweetgrass" and soon attracted several dozen "converts" to a rabbit form. The United States outlawed animal-based gengineering, but after a prolonged legal battle, the Supreme Court granted an exception for Lapists as a "legitimate religion" with a legally protected rite.

The movement continued to grow, becoming a small but prominent group through the end of the current stories' timeline.

Lapists study the Book of Peace as a scripture, and hold regular Discussion Times, typically on Sundays and Wednesdays. These events are nominally for Book study, but in reality believers use them to share social interaction and discuss personal and community issues.

Lapists take new names to go with their new bodies. All of these new names adhere to the general pattern "[Specific plant] [Performer of specific activity] Rabbit". The tradition began with Aaron, who rechristened himself "Sweetgrass Bloomsniffer Rabbit," a name chosen spontaneously by a little girl. Other Lapist names include "Bluegrass Spelunker Rabbit", "Popcorn Scribbler Rabbit" and so on.

Lapists are portrayed as being anthropomorphic rabbits, because of their main ritual: an elaborate physical transformation called the Change. Early Lapist characters joined the movement as adults, but as new generations were born, the children were changed at a young age. Far from merely cosmetic, the standard transformation process alters a person's DNA with rabbit-based genes. Because of the altered body -- large feet, mobile ears, and tail -- the brain itself must be changed somewhat to accommodate it. A very small percentage of the population is incapable of safely undergoing this procedure, or similar regenerative therapies, due to biochemical problems.

Lapists believe that the Change serves two overlapping purposes. One is that the changes in brain structure and chemistry alter behavior directly, making the person more peaceful and friendly. The subtler aspect is social reinforcement. As the believer commits to appearing in public with a rabbit-like appearance as a religious practice, something possible even before any transformation, others react to them as a representative of the religion. The believer feels a duty to be on their best behavior and to live up to the group's positive stereotype. The fact that outsiders think "rabbit" reinforces that stereotype and peer pressure; e.g. Lapists are vulnerable to spontaneous juvenile adhesion (hugging).

Not all Lapists have undergone the Change. A novice member wears imitation rabbit ears and tail in public as a means of preparing themselves. The relative importance of the physical rabbit-form and a person's actual beliefs and behavior is a major theme of the Lapist stories. Several protagonists question whether they "have a Rabbit in them," meaning whether they live up to the ideal regardless of their physical form. Aaron/Sweetgrass wrote much of the Book of Peace before his transformation, based on insights gained from other, traumatic experiences. The interplay is summed up by one character:

We're no better inside than the next man, despite the fact that we do turn the natural aggression knob down a few clicks as part of the Change. But, in the end, I think that what is important is the fact that we are trying to be something more, trying to achieve higher goals. That, far more than the fur and funny teeth, is what sets us apart from everyone else. - Digger, Full Immersion

The Lapist Church is known to have at least one physical place of worship; a converted Christian church renamed the Oaktree Temple. The Church possesses a gengineering clinic that performs the conversion procedure, which can also be done elsewhere. Its other assets are unknown, but it probably has considerable funds from Aaron/Sweetgrass' numerous patents.

The contents of the the Book of Peace itself are never revealed in full, though short sections are quoted by different characters throughout the stories.

The Book started out as the personal journal of Dr Thomas Aaron as a supplement to his imminent gengineering into an anthropomorphic rabbit- it wasn't intended to become the basis for any religious movement. But as Dr Aaron underwent his Change into Sweetgrass, he discovered things about the Change and about himself that- evidently- others caught on to, and agreed with. Little is revealed about Lapism's infancy, and less about how his journal became The Book of Peace as it is known to Lapists.

Readers of the series are lead to believe that in every story chronologically following "In The Beginning," a copy of The Book of Peace is owned and frequently read by almost every Changed Rabbit by the fact that Silkfur, Sundew, and both of their children each have their own Book. Weekly and bi-weekly Discussion Times are supposed to focus on study, absorption and talk of the Book and it's message, though this is not a strictly enforced rule.

The physical object that is The Book of Peace is described thusly: "The cover was of hand-tooled Cordovan leather, the leaves were gilt-edged..." "...the very finest paper."

Geusz has described Lapism as "an entirely new kind of religion," yet it has roots in, and similarities to, existing belief systems. Lapist teachings do not specifically mention any gods or appeal to revealed knowledge, making Lapism similar to some religions, such as Confucianism, that are sometimes called "philosophy" rather than "religion." The definition of religion is fuzzy enough that Lapism could be considered as either, and even Lapist characters disagree on the question. The Book of Peace is described as Lapism's "bible" and is the topic of extensive study as with Christianity's New Testament. Church members argue about whether its moral positions should be taken literally, or questioned and reinterpreted. As with Islam and the Quaker denomination of Christianity, there seem to be influential Church members but no official clergy. Lapists have no obvious idols, as with Christians, and seem to avoid formally worded prayers, as with Mormonism. [1] As with religion in general, Lapists maintain a community of believers and identify themselves by appearance and ritual.

Lapist ethics emphasize kindness and peace (as with the Quaker Testimony of Peace) but do not reject violence when necessary, judging from the design decisions made for the original anthro-rabbit template. The lack of alleged divine revelation or a racial aspect sets it apart from most existing religions. The group's founder is revered as a leader, but unlike many religious prophets is not said to be divinely inspired. The fact that the Lapist body template involves improved senses and altered diet ties the movement in with Transhumanism, the belief that technology can help people to surpass human limitations. One character suggests that Lapism hearkens back to ancient totemic faiths as well as embracing Transhumanism.

The Book of Peace explicitly rejects proselytization, on the grounds that the decision to convert must come from the individual, but almost immediately after Aaron/Sweetgrass' death Church leaders questioned how strictly this doctrine should be kept. The eventual decision, to the extent that the issue was settled, was that the Church would welcome media attention but avoid outright advertising, letting members' presence in the community serve as a recruitment tool.

The overall setting of the Lapist stories is twenty-first century America. Its exact future history is not described in much detail, but includes the development of advanced gengineering technology and is not clearly utopian or dystopian. A noteworthy event that takes place early in the series is the schism of the Catholic Church into its Roman branch and a new American branch, which struggles to reconcile its faith with independence from the Vatican hierarchy.

Some aspects of Lapism remain yet unknown through the stories. The legal battle over gengineering and the initial gathering of converts are not thoroughly described, and of Book of Peace itself only a few snippets are quoted by characters. The exact content of the Book is left to the reader's imagination, as is the setting's future.

Each Lapism story focuses on different aspects of the lives of individual believers and the people around them. These are the existing stories in the order written, with a mostly spoiler-free synopsis of each:

Geusz' "Freedom City" novel series also involves gengineered rabbit-folk. As the two continuities (FC and Lapism) have very little else in common, however, they should not be regarded as co-existing within any larger setting/world.

The stories Drama Class. Full Immersion, Schism, and In the Beginning have been collected into a 300-page paperback edition, The First Book of Lapism, which was published in June 2009 by ANTHRO Press.

Flayrah has related stories:
Review: 'The First Book of Lapism', by Phil Geusz
Opinion: Do rabbits need a reason?