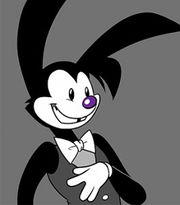 Lapin Beau is a somewhat well-known artist on Fur Affinity. His art program of choice is Corel Painter X, although he makes use of many other programs, and is currently learning the use of Adobe Photoshop, Illustrator, and Flash.

Lapin Beau's name is based on the french words for "handsome rabbit," though "Beau" and "Lapin" have been reversed for a more pleasing sound. He is a black and white cartoon rabbit from the late 20s. Unfortunately, due to his uncouth mannerisms and his tendency to put sex above all other priorities, he lost his job as a cartoon actor, and works odd jobs around ToonTown. He has scythe-shaped ears, a purple nose (which sharply contrasts the rest of his grayscale color scheme), and a gap in the middle of his front teeth. His clothing consists of a gray vest, white bowtie, dark gray shorts, and a pair of sneakers. He bears a striking resemblance to Yakko, Wakko, and Dot Warner from the 90s cartoon, "Animaniacs", but unlike the Warners, whose species are indeterminate, he is obviously a rabbit. He also appears to have a condition that causes him to be intoxicated by root beer consumption.

Leather Lad, a 20-page graphic comic book, available at FurPlanet, revolving around Leather Lad and his arch-nemesis, the incredibly busty Lace Lass. A sequel was also created, Leather Lad, Issue #2 which appeared in 2009, and a third issue was published in 2011.