Lady and the Tramp

From WikiFur, the furry encyclopedia.
Jump to: navigation, search
Culture > Movies > Lady and the Tramp 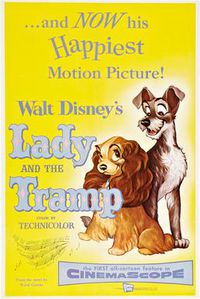 Lady and the Tramp is a 1955 American animated romantic comedy film, produced by Walt Disney and released to theaters on June 22, 1955, by Buena Vista Distribution.

The 15th animated film in the Walt Disney Animated Classics series, it was the first animated feature filmed in the CinemaScope widescreen film process. The story centers on a female American Cocker Spaniel named Lady who lives with a refined, upper-middle-class family, and a male stray mutt named Tramp. The film is based on Happy Dan, the Whistling Dog by Ward Greene. A direct-to-video sequel, Lady and the Tramp II: Scamp's Adventure, was released in 2001. In 2019, a live-action remake was released.