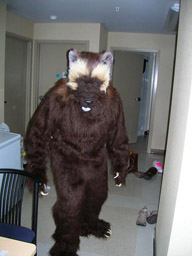 Since she was young, Lady Serpent played games with her brother and the kids in her daycare, where they would pretend to be animals. Predominantly the animals would include dinosaurs, cougars, wolves, and occasionally dragons. She spent her childhood fascinated with animals and would draw, read about, and look after many different kinds.

Sephren played with dinosaurs and occasionally My Little Ponies as a child. She was never interested in Barbies and has never been interested in 'girly things'.

Sephren's first stuffed animal was a rabbit. When she was four, it got lost at a baseball game and she was devastated. Later, she got a 'little bird' from Sesame Street, and it took Rabbit's place. Any stuffed animal she ever had was named after what it was. Her favorite, the yellow bird, was named 'Bird', and she also had a frog named 'Frog' and a cat named 'Cat', as examples.

Sephren discovered the furry fandom in 2004 through the CSI: Crime Scene Investigation episode 'Fur and Loathing', and was fascinated by the idea of people wearing fursuits. After looking up the term 'furries' on the internet, she realized they were very different from what the show described, and that she fits in very well with the community.

Shortly after, she discovered furry.ca, a community forum resource for Canadian furs. She was eventually offered a position as a moderator by the forum's administrator, Benjamin, due to her calm nature and ability to deal effectively with hostile situations.

More recently, she is the creator and host of the annual BC FurBQ, three-day outdoor camping get together involving furs from all across Canada.

Aptly named, Lady Serpent is a keeper and breeder of exotics, specifically snakes. In 2006, she had over sixteen snakes as well as scorpions, small lizards, and a breeding group of praying mantids.

Her passion lies in nature, and much of the artwork she creates involves animals. In 2008, she enrolled in Thompson Rivers University to pursue a career in Biology.

Sephren, under the label 'Serpentine Creations', does fursuit work as well as select artwork commissions. Her subject matter is not limited, although she is only open for commissions on a selective basis due to time constraints. Her first fursuit, 'Mike', was a tiger created in 2007 as a baseball team mascot. He first appeared at games in Oliver, BC.

Sephren then went on to purchase two more suits in 2008. The first was a wolverine named 'Skallagrim' from CarnFX, and the second was a tribal bear purchased on eBay from a female wolf furry in the USA. 'Skallagrim' was given his name by Yig, the 'Mobile Suit Bunny' who can be found on furry.ca.

Lady Serpent's artwork often consists of very lanky creatures with very little body fat. She has very little herself out of personal preference and creates her artwork to be an extension of her own body type.