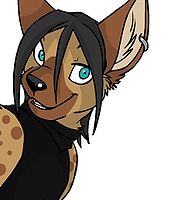 Kyoujin, also known as Kyoujin The Hyena or Kyoujin Anei (born June 7th, 1986 in Indianapolis, Indiana, USA),[1] is a bisexual furry artist and musician who lives in Seattle, Washington, USA.[2]

Kyoujin is of German/Irish descent, has previously lived in Indiana and is a video game developer, having worked on several AAA titles.[3]

Kyoujin is the founder of menwithmachineguns, an electronic based music project that focuses on remixing and covering music from classic video games, which he posts on YouTube. He plays the piano/keyboard, and has done vocals for several bands in the past.

Another hobby Kyoujin also enjoys auto racing and has been circuit racing on and off since 2004, and has under a year of experience racing Exotics. [4]He owns a Tesla Roadster Sport high end carbon fiber model, and previously owned a 300ZX Z32.

Kyoujin believes his first introduction towards the furry fandom began when he got into Pokemon and roleplaying back in 1998. Andrew originally used the nickname "Kyoujin" for one of his characters in late 1999/early 2000, though soon afterwards began to use it as his own nickname for games when he became sponsored and began to compete in tournaments, as he felt the name fit his playing style. Kyoujin is a Japanese term, some of the definitions include "madman", "lunatic", and "assassin's dagger."

In 2001, after stumbling upon furry pictures by viewing Pokemon related art, Kyoujin joined LiveJournal, and eventually began to jump into the furry community. It wasn't long after he joined websites like deviantART and began to draw, though he states that it was rare back then.

Kyoujin was a former full time Fur Affinity administrator for four years, but has now returned to help part time.[5][6]

Kyoujin's fursona is a short 5'3" spotted hyena with blue eyes. His hair consists of only black bangs that usually fall in front of his face, usually off to one side or the other. The rest of his head is just covered in brownish, messy-styled fur. Piercings include a purple barbell in his left eyebrow and tongue, as well as random numerous piercings in his ears.

Kyoujin also has an alternative pokesona, an anthropomorphic mewtwo. He also has an assortment of roleplaying/story characters that don't represent him, such as his main World of Warcraft based character, a Horde troll named Dejt.