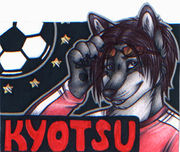 Kyotsu (born July 28th, 1988) is a furry who is gender fluid[1] and whose fursona is a spotted lion[2][1]. They are from Indiana and currently attend Purdue University. Kyotsu is married to Metonymy. 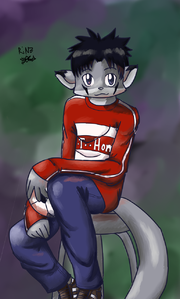 Kyotsu is a relatively new character despite his creator viewing the fandom from the outside for several years. He remained under the alias of StarwindX9 for several years during his transition from otaku to furry. It wasn't until 2007 when he was a regular user in the Clawcast IRC that he was inspired to create a fursona. Considering his otaku background, his fursona was based off of Yoko Kurama from the anime YuYu Hakusho.

Kyotsu continued as a generic silver fox until 2008 when he commissioned the first drawing of his fursona by a fellow Clawcast IRC user Rinz. Kyotsu used a picture of himself as the base so his fursona looked somewhat close to him in build and hairstyle. He changed from an all silver fox to an artic fox, adding a few black accents on his tail and ears and markings under his eyes based off of Tsukasa from the anime dot.hack//sign.

His time with the Clawcast IRC where he was a regular[3] inspired him to become more active in the fandom. He has attended local cons in the midwest area and occasionally attends LAFF meets when he is able. Kyotsu commissioned a fursuit from Savageturtle Studios in 2010 which debuted at MFF '10 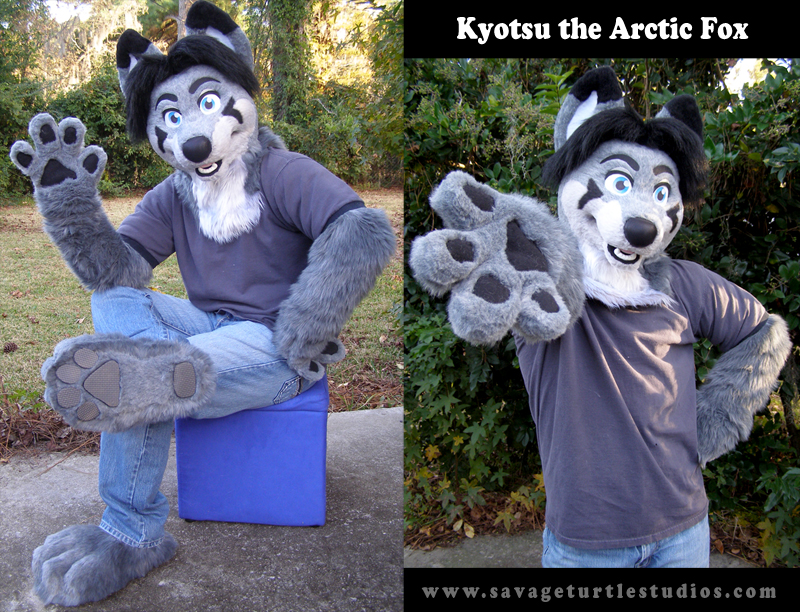 Kyotsu is also an amateur writer, but posts his work on alternate accounts on FA and DA. Despite his Mother, Sister, and Brother-in-law all being artists, Kyotsu is not an artist himself.

Kyotsu is known for his involvement with soccer in his local community playing the sport since he was old enough to walk. During his high school career he made two semi-state appearances. He attended Indiana University soccer camp, winning most improved goal-keeper both times. After high school he continued to play with his former high school team mates in various local men's leagues before frequent injury forced him to quit. His love for soccer still shows as he is almost always seen wearing a soccer jersey.

Despite frequently wearing a German soccer jersey, Kyotsu is not German (besides tracing back a few generations of his family tree). His adoration of the German national soccer team comes from him idolizing 2006 World Cup MVP Oliver Kahn. Due to soccer's lack of prominence in America, Kyotsu doesn't have a strict allegiance to any clubs. He instead is happy to watch teams that have American or German national stars playing for them. His favorite Bundesliga team is Bayern Munchen. He doesn't have a favorite English Premiere League team but has been seen wearing an Everton jersey as well as a Chelsea jersey. He has openly voiced his dislike for Manchester after the departure of goal-keeper Tim Howard.

In school, Kyotsu is a member of the Purdue Music Gaming Club, but due to his busy work schedule he doesn't attend meets very often. He also spent a year with the film department as a cameraman and grip. He filmed live performances as well as sporting events, mostly basketball and football.