For the German artist, see Kyo.

Kyo showing off, and representing his cashflow.

Kyo the Spotted Skunk is from northern Indiana, in the United States. He was born on April 16th, 1987 in Goshen, Indiana.

He thinks skunks are "radical", and attends Mephit Furmeet every year. Although he is not quite an anti-fur, he says that "most of the fandom agitates him." Music is his life. Indie rock and roll and the hardest of metal are at the top of his list, though he says he will listen to everything, even country music.

At age three, he was a model for OshKosh B'Gosh. 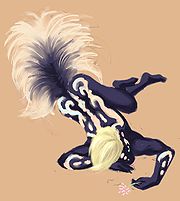 He is also a furry artist, though he has not posted much of his work to the Internet.