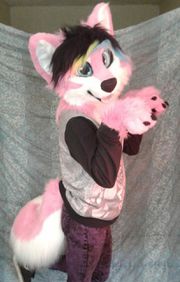 Kyle Lambert, better known as Klace Husky or just Klace, (born November 3, 1990)[1] is a fursuiter, entertainer, game developer and writer from Winnipeg, Manitoba, Canada. He was a guest of honour for Wild Prairie Fur Con 2019.

Klace's fursona is a pink pop idol husky with rainbow hair highlights, based on an older Second Life avatar. Fursuits of the character have been built by LazyLeopard and Battitude Studios.[citation needed]

Kyle Lambert released the game Major\Minor in December 2015 on Valve's Steam platform. At this time, it consisted of only the first of twelve planned chapters.

The release of the game's initial episode garnered negative Steam reviews because it was unfinished, over-utilized stock assets, and didn't correctly attribute sources or pay licensing royalties for a Sergal character.[3] Over the course of the next year, the game was completed and many of those problems were corrected. The final chapter count of the game was ten, with some of the chapters being merged into one larger chapter (three and six).

To celebrate the completion of the game, a "Complete Edition" was Greenlit and launched onto Steam's storefront in October 2016. There were some concerns[who?] that this was an attempt to "whitewash" the review section and start all over again, effectively deleting the criticism that spurred so much debate about the title. To ensure that this wasn't the case, Kyle gave a free copy of the Complete Edition away to all owners of Major\Minor, and encouraged them to copy their review to the new store page -- whether it was positive or negative. Even after this was all said and done, both store pages of Major\Minor retain a largely positive reception (80%+), with users praising its in-depth emotional story and beautifully detailed artwork.

Major\Minor was featured on the 2016 Recommended Anthropomorphics List,[4] and has won "Best Game" in the 2016 Ursa Major Awards.[5]

On February 14, 2017, Klace opened a Kickstarter[6] for his second game, "Winds of Change". The Kickstarter raised $29,410 of the $7,500 goal. It was released on Steam Early Access in March 2018, with the first area finished and entirely voice-acted. The characters are drawn by FeyVaras and the music was created by Fox Amoore and Joel Steudler.[6]

The game was released on Steam in August 2019, which was followed by a Switch port in June 2021.

On November 9, 2021, Lambert announced his third game "Komorebi" via opening a Kickstarter (with a goal of $9,640) and a free demo on itch(dot)io.[7] The main cast features Sean Chiplock, Jonah Scott, Michael Kovach, and Jesse Inocalla with Casey Mongillo as Klace.[7]