Kutsivi is an artist who created the Tykeriel fictional species.

Tykeriels are not mammals, avians, reptiles nor amphibians, despite sharing some features the aforementioned species possess. 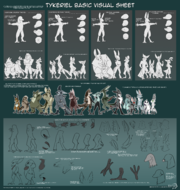 In appearance, most Tykeriels appear to be avians, with lagomorph-like traits, lacking fur and instead possessing feathers and scales. Despite this, Tykeriels possess some features avians do not, such as teeth.

They also have claws of varying lengths (which can be sheathed), with five fingers and four toes on hands and feet, respectively; where feet are concerned, three toes point forward with one protruding from the back. It should be noted their noses are grooved in, somewhat like a skull, with nostrils inside. Snouts can be fairly long, though females of the species tend to sport shorter, thicker and more rounded muzzles than males, as well as more pronounced keel bones. Females are also larger than males, and while sexual dimorphism isn't overly noticeable, their tails point upwards where as males point downwards. Tykeriels also possess a wide variety of colour patterns, albeit most are monochromatic (such various oranges).

Amongst the species are approximately 4 different kinds of Tykeriels, each living in a different corresponding part of their home and named accordingly.

Average heights for males in this race is 189 CM, while females grow to 198 CM. Eye colours tend to range from grey (common), to hazel, blue a,bee, and red (the rarest).

They can have graduated, or clefted tail-feathers. Female Heistukks do not have pronounced chest fluff due to the heat. Male Heistukks typically have less mass than females, and rely more on agility. Female Heistukks have slightly more mass, but it isn’t very noticeable; they possess longer neck feathers. It is stereotyped that Heistukks have a disliking toward Stoffek Tykeriels due to their ignus system inferiority. A Heistukk’s most used languages are Elvennek, and Earth-Ominor Creole English. Heistukks mostly pair with their own race, and sparsely with other races.

The average height is usually 166 CM for males and 170 CM for females, whereas eye colours go from the common black to brown, beige, and rarer red.

The average height for males is typically 191 CM. Females are 165 CM, as Vertorks are the only race where males are taller. Eyes are commonly teal, hazel, amber, and rarely beige.

On average, the male height is 180 CM, while female is 184 CM. Their eyes are commonly blue, red, grey, and rarely amber. Also, Audrusks are never blue nor green.

A Tykkup starts life with large ears, feet, eyes and pure white fluffy feathers, similar to chicks. Parents aid in preening during these years. Plumage usually does not fully wean until at least 4 years after birth. After one full day has passed, the Tykkup will gain vision, and drink their mother’s milk until 6 months old, at which point their beaks are at their toughest. At this point they are considered vestigial, with females having shorter tails.

Tykkles continue to own their beak-like snout but it will be softer, similar to cartilage. Tykkle years are the prime age for brain development, absorbing infort,action at their fastest during this time. It is also the most active age period.

Adolescent Tykeriels will lose their "beak" as it migrated and merges with the nose, giving them a more canid-vulpine shape. At this stage, they develop longer feathers around the Ignus gland and tail ends, with females gaining erect tail feathers while male ones remain pointing downward. Male vocal cords vary greatly and change from deep to high voices; this is due to evolution, in which males would sing to attract and mate with females of the species, after which their faces became boxier and grow longer muzzles. Female vocal cords have less variations, on the other hand, and make noises at higher pitches. Males grow faster in terms of height at this point, with their body shape changing with them. Tykeriels do not fully sexually mature until the age of 16. Ignus glands also begin to develop as maturity occurs, allowing them to utilize skiroxide and eroskide. However, on average, adolescents tend to be incapable of using heat-related abilities until they are 15. It should be noted males mature faster than females.

Prime adults are when a Tykeriel has fully developed into a mature specimen. The growth rate becomes steady, with males subtlety growing to reach 24. This age is when most Tykeriels begin to desire starting a family, or get into a serious job. At this point they have likely learned to control their heat-related abilities.

Aged adults will start to have a physical decline on their body, of which is equally subtle. Most specimens undergo a mid-life crisis at this age. Aged Tykeriel will have somewhat molted, long feathers due to a lack of preening. Scales begin to appear to be dry, and feather "dander" may become more prominent as time goes on.

An elder’s body mass declines as the years go by, their very sporadic preening causing feathers to become somewhat discoloured and broken, and eyes will start becoming cloudier and surrounded by wrinkles. While elders can still move without canes, they will be less jittery, and will more likely decline in physical activity. Naturally, feathers begin to fall off I’m so,e areas that were aciddentlyy [lucked and not properly preened. Mental stability also begins declining. While most elders grow to age 120, others willl only live up to a mere 90.

Not much is currently known about the past of Tykeriels, although when what is known is that they take residency within Ominor.