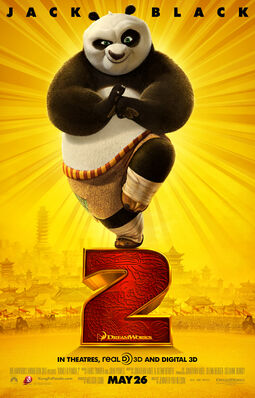 Kung Fu Panda 2 is a 3D animated feature movie premiered at May 26, 2011. It is second installment of Kung Fu Panda series and first of four planned sequels. The setting of the series is Ancient China populated by various species of anthropomorphic animals. The story takes off soon after the end of the first movie, in which Po the panda (huge Kung Fu fan, but unlikely Kung Fu fighter) accidentally was named the Dragon Warrior and lived up to it. In the second movie Po is a respected Kung Fu master who fights side by side with the Furious Five, the greatest Kung Fu fighters of various species (also featuring in the first movie).

Po's duty as the Dragon Warrior is defending villages in the near of the Temple. Kung Fu fighters has done it for many years, and thus this area is called the Valley of Peace. Once, when Po and the Furious Five kicks out a band of wolves who was robbing a village, Po sees a symbol on wolf's armor, and it strikes him familiar. Lost in flooding memories of his forgotten childhood, Po misses an attack, and only his friends save him.

Po still isn't sure what he saw and doesn't know of the events happened years ago when the land was ruled by a royal peacock dynasty. They knew the secret of fireworks and used it for entertainment, but the young heir Shen, the albino peacock, has discovered that it can be used for war. He consulted the royal soothsayer (an old female goat), and she predicted that his conquest will be stopped by "a warrior of black and white". Shen understood that is was a panda who will interfere with his war plan and sent a squad of wolves to slay everyone in the panda village. For his merciless act Shen was exiled from his clan and swore to return one day.

What Po remembered was his mother saving him as a baby. Because of these suppressed memories (Po was raised by a goose and thought him to be his true father), Po couldn't achieve inner peace - the highest virtue of Kung Fu.

Also unknown to Po, the wolves that he and the Furious Five has beaten were Lord Shen's minions gathering metal for his weapons. Soon Lord Shen invaded the Gongmen City, former peacock capital now ruled by a council of craftsmen. Lord Shen's cannon easily defeats Master Thundering Rhino, one of the greatest Kung Fu warriors. Seeing this, the other two protecting Masters lose hope and let themselves be imprisoned. Existence of the very Kung Fu is in danger. When the word of this reaches Master Shifu's temple, he immediately sends Po and the Furious Five to liberate the city.

The city is now overrun by wolves. Once warriors reach the tower (both seat of power and a dungeon), they try to persuade Masters Storming Ox and Croc to help them, but to no avail. More so, during the argument they are discovered by the wolf leader. Warriors chase him to prevent from reporting it, only to be led in a trap and brought to the court of Lord Shen. It is now when Po and his friends first see the cannons. Warriors manage to free themselves and even destroy the tower and the arsenal in it, but once again in the heat of battle Po was frozen solid by Lord Shen's dynastic symbol (this time he sees it on Shen's tail feathers, since the symbol is peacocks' characteristic "eye"). The Dragon Warrior still doesn't remember the events of his early childhood, but the look of the symbol returns him to his trauma. Because of Po's delay, Shen escapes.

Afterwards, Master Tigress asks him to stay behind on this mission, for him and for success of the mission. Po, wanting to ask Lord Shen about his childhood, wouldn't listen and moves out to destroy Shen's weapon factory - the same task that the Furious Five independently planned next. When Po confronts Shen, the peacock lie that parents abandoned Po. This distraction leads to the catastrophic defeat: the Furious Five is captured. Po, left for dead, is tended to by the goat soothsayer. She helps him to reconnect with his past, to discover the truth, and this finally gives him the inner peace.

Lord Shen and his cannon-armed fleet is ready to sail out for the conquest. The Furious Five is chained onboard. Po appears to stop the fleet. In the battle that followed, the wolf leader refuses to aim cannon where his men are and is instantly killed by Lord Shen. The peacock is left for himself to deal with the panda, and he aims all cannons at Po. The cannons are fired at close range. But the inner peace, which gives complete control over one's body, makes it possible for Po to redirect cannonballs right at Lord Shen's fleet. When offered a choice, the defeated Shen choses to hold on to his ways and attacks Po. In his anger, he accidentally slashes ropes holding the last cannon and dies by it. The China and Kung Fu are saved, and peace has returned to the land.

Last seconds of the movie show Po's biological father living in a remote panda village. In this moment he sensed that his son is alive.