Krystal 'Aelita' Kitsune, also known as xxXSketchBookXxx (born January 11, 1994 in Los Angeles, California, USA,) is a transgender furry artist , cosplayer, vlogger and voice actress who lives in Los Angeles. Krystal is known for doing digital art, mainly around My Little Pony. Krystal is also well known in the Blood On The Dance Floor fandom, as a local friend of Dahvie Vanity (SkullKid).

Krystal began her artist life in 2008 on deviantart as "Lyoko4lyfe2", later changing it to "xxXSketchBookXxx"[1]. Krystal has no major artworks as of yet, however, several artworks have gone viral among the Brony fandom as well as having one artwork be featured in Sonic Universe Issue #42[2]

Although She has made well known artworks, She is currently concentrating on her first major Teens and Adults only Furry Comic, which will be released sometime late 2017, or early 2018. The comic is influenced on furry artist, Jay Naylor's works. She posts her newest and most current artwork on her facebook page[3] along side new My little pony art on her derpibooru page[4]. She doesn't take commissions, however, she does make small artworks for voice actors.

Krystal's Fursona is named, Winter Fox. she plans to use Winter as a main protagonist in her current furry comic. Winter Fox is a hybrid between a Siberian cat and a Gray wolf with teal fur. Winter also seems to share similar tattoos as Krystal (Star Fox), suggesting Winter Fox comes from the same home planet, Cerinia. 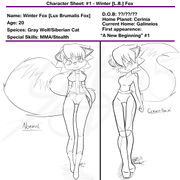 Though voice acting was her not a career choice, she got into by accident. Socializing with famous voice actresses such as Tara Strong[5] and former Voice actress Alesia Glidewell[6] (Voice of Krystal The Fox ), she landed a "additional voices" part in an Anime called, SwordArt Online. Since then, she has not appeared in other project and It is not known if she will continue to do voice over work.

krystal also manages a site, The Kitsune Network, where she interviews voice actors. The site serves as a means to obtain information on any fandom, mostly the anime fandom and to keep up to date on the fandoms. Its for this reason, krystal does not produce artwork on regular basis.