Krystal is a fictional vixen character created by Nintendo and Rare for the Nintendo 64 game Dinosaur Planet. Her role in that game was intended to be a playable primary character, but in the revolutionary introduction of the Nintendo GameCube, her role changed. The game Dinosaur Planet was scrapped and its elements were modified and altered into Star Fox Adventures. Her playable status was made short, reduced to basically the tutorials, and she became the "damsel in distress" in the game who was trapped because she could channel spirits. 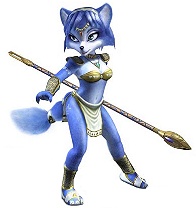 Krystal, as she appears in Star Fox Adventures

Her popularity has been noticed by Nintendo, and in a joint cooperation effort with Namco, she became a primary character in the Star Fox universe. Krystal's role was advanced when Namco gained permission to reuse her in the video game Star Fox: Assault as a pilot and a playable character in the multiplayer mode. It is in this game that it was introduced that she was a telepath, a fact that was not all too useful in the game, but was used as a cutscene plot device to launch a mission. It also confirmed the romantic connection between her and Star Fox leader, Fox McCloud. 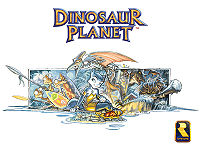 Krystal, as she would have appeared in Dinosaur Planet

In the game Star Fox Command, it is revealed that Fox and Krystal's relationship blossomed, but Fox was concerned over Krystal's safety and asked her to leave the Star Fox team. Upset over his decision, Krystal left Fox, which kills their relationship, and hasn't been seen since. During the course of the game, it was discovered that Krystal joined the Cornerian Army as a pilot, and during the Anglar invasion, joined Star Wolf. She was once again a short-lived playable character. The game features multiple, conflicting endings, some of which show Krystal staying with Star Wolf and starting a relationship with Panther, another has her renaming herself Kursed and becoming a bounty hunter after being driven out of the Lylat System under accusations of betraying Fox. Even more endings have her rejoining Star Fox; one of the endings shows her and Fox settling down to start a family, having a son named Marcus. An interview with two of the game's producers, Q Games' Dylan Cuthbert and Nintendo's Takaya Imamura, suggest that none of the endings (perhaps not even the game itself) are considered canon, and that any sequel will ignore them.[1] Thus, the entire series became unfinished.

Outside of video games, she is a fairly popular and common character -- conspicuously, within Furotica.[2] She is often paired with many crossover characters from other fandoms, and the most popular pairing is when Krystal is intimately depicted with Renamon, a fox-like, female Digimon (though in some cases, such as in artwork done by Yawg, the two are depicted as rivals).

Krystal appeared wearing a skimpy golden attire mainly consisting of a golden bra-like top and nothing but a small white loincloth covering her bottom, leaving her midriff and belly button showing. She also wore jewelry, including two bands on her tail, silver braces on her arms and legs, shoulder pads, and white and golden sandals. She also sported a tiara on her head, and a necklace with a turquoise pendant. In this outfit, it is shown that Krystal has tattoos on her upper arms, both hips, and the bottom of her back.

Nothing was known about her earlier life, except that her home planet of Cerinia was destroyed, presumably by the spirit of Andross, leaving her as the only survivor. While searching the universe for the truth behind this, she answered a distress call from Planet Sauria. She rode on the back of a CloudRunner to General Scales's battleship, which knocked her staff out of her hands in the process. Scales was responsible for the attack on Sauria and threw Krystal over the edge, but the CloudRunner took her to Krazoa Palace. Krystal then entered a Krazoa Shrine and got the first Krazoa Spirit by completing the Test of Observation. However, after she released the Krazoa Spirit, she was trapped inside a crystal by Andross, who began to drain her energy.

When Fox got all the remaining five Krazoa Spirits, the sixth when Andross forced Scales to give it to him, Andross used Krystal's power to control and absorb the Krazoa Spirits and bring himself back to life. Krystal was released from the crystal she was imprisoned in and Fox saved her from falling to her death. Krystal took her staff back from Fox and shot fireballs at Andross, to no effect. Fox fought Andross in space and, with Falco's help, destroyed him once and for all, releasing the Krazoa Spirits who restored Sauria to normal. Afterwards, Krystal joined Star Fox.

Krystal appeared wearing a blue body suit, tail bands, and braided sections in her "hair". She no longer wore a necklace, and her tiara was also different. This time, Fox, Falco, Slippy, and Krystal fought against the renmants of Andross's forces, led by Andross's nephew Andrew Oikonny. They defeated Oikonny on Fortuna, but he was destroyed by an aparoid moth which attacked Krystal. Fox defeated the moth. Answering a distress call on Katina, Krystal battled aparoids alongside Falco and Slippy, in arwings. When Pigma stole the core memory of an aparoid walker, containing the location of the homeworld, Star Fox went to Sargasso Station to find him. They fought against Wolf and his team, Leon and Panther, and Fox defeated them. Panther fell in love with Krystal and answered her question as to where Pigma was, saying he was on Fichina.

Krystal, Slippy, and Falco battled more aparoids on Fichina and eventually chased Pigma down into an asteroid field. Fox destroyed three enemies on Krystal's tail. Krystal often sensed a large enemy presence (though this dialogue is only heard if Fox has a high enough score at at least two points in the level). Eventually they reached Pigma, who was assimilated by the aparoids and merged with an aparoid spacecraft. Fox, Falco, Slippy, and Krystal defeated him, and he was destroyed, leaving only the Core Memory. Afterward, Krystal sensed a distress call from Sauria. Fox and Krystal fought the aparoids on foot while Slippy and Falco were in arwings. Krystal destroyed most of the aparoids in one of the temples of Walled City and Fox destroyed the aparoid hatchers, leading to victory and peace for Sauria for a long time to come. Fox and Krystal were reunited with Tricky, who made a comment about Fox and Krystal coming to Sauria for their honeymoon, although Fox denied that he and Krystal were in love yet.

Corneria was decimated by aparoids so Star Fox fought off the aparoids there, including General Pepper whose ship was infected by aparoids. He was defeated by Fox and, thanks to Peppy, survived. Afterward Fox, Krystal, Falco, Slippy, Wolf, Leon, and Panther all participated in a dogfight against the aparoids to protect the Orbital Gate, which would teleport them to the homeworld once Slippy's father Beltino finished a selfdestruct device that would destroy all the aparoids if given to their queen. Once the device was finished they went to the homeworld and reached the core, although Wolf, Leon, and Panther distracted near invincible aparoids so Star Fox could reach the homeworld core and fight the aparoid queen. They defeated her and Fox launched the selfdestruct program into her. She suppressed it and escaped to create an antibody, but Fox, Falco, Slippy, and Krystal went after her and defeated her, causing the selfdestruct program to destroy her along with all the aparoids.

They escaped the aparoid homeworld before it blew up. According to Fox, Wolf's team survived, and Peppy, who was forced to crash the Great Fox into the shield so Star Fox could reach the core, also survived. They then have a reunion on Sauria.

Krystal appeared in a suit similar to her Assault suit, but the suit is pink and purple, and her tail bands are gone. The game takes place three years after Assault, where Fox, Falco, Slippy, and Krystal have saved Corneria from destruction. One day, Fox fired Krystal from his team, due to her safety issues. Broken-hearted, Krystal broke up with him by leaving Star Fox, and went far away. Little did Fox know that she joined the Cornerian Air Force for a while before she started her relationship with Panther Caruso. Then, she became a member of Star Wolf.

After putting an end to Dash's reign of terror with Venom, Fox finds Krystal, enjoying her time with Star Wolf in Katina. Feeling sorry for what he did, Fox begged Krystal to rejoin his team permanently. Although the outcome remained unknown, it can be shown that Krystal hated Fox so much, she stayed with Star Wolf. That way she can spend some more time with Panther. She would eventually stay with them forever, much to the dismay of everyone. Although Wolf O'Donnell, Leon Plikowski and Panther were saviors, Krystal was considered to be a traitor, who was treated badly. She would then abandon the Lylat System for good, due to her past (ranging from Cerinia's destruction to being hated by everyone) haunting her, change her name to Kursed, and begin her new life as a lonesome bounty hunter on Kew. Sometime later, Fox would find her again, yet he never recognized her.

Fan research has uncovered several pieces of deleted audio that show that Krystal would have had a bigger role in Star Fox Adventures than in the finished game. These include Krystal shouting warnings to Fox, asking Fox why he saved her without knowing who she was, and even stating that she would join the Star Fox team if Fox would kiss her. It has also been discovered that Krystal's messages to Fox when he finds her staff were originally in English.

An internet meme based on Krystal, trying to eat a sandwich is called "Krystal can't enjoy her sandwich".

Another meme based on her is the catch-phrase "Everyone's furry for Krystal".

The third meme based on her is "Krystal ruined Star Fox", in which some people hated her for appearing in the franchise, being more of a weak character instead of a strong character, just like the one in Dinosaur Planet.

Krystal also made a cameo appearance in Super Smash Bros. Brawl, telling Fox and Falco to stop fighting. In addition, a trophy of her wearing her bodysuit from Assault is shown when awarded. Some stickers of her exist, too.

According to IGN, she became one of "the six faults of Star Fox", in which she was named a "blue-furred she-beast", and confirmed that "Fox never needed a love interest".

There is also a website called Krystal Archive, in which it is dedicated to her.