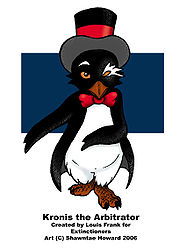 Kronis is a character in Extinctioners.

This is the Arbitrator, master of time and space. He is a cosmic being that chooses to take the form of a penguin. He is full of wisdom, but very mischievous. He is responsible for saving Onex from the void of a bad teleportation by Shadowstalker, and is responsible for giving them their weapons known as the Brothers.

The Arbitrator was created by Louis Frank for the use in the comic Extinctioners. His first name Kronis was given to him by Shawntae Howard. He made his first comic appearance in Extinctioners issue number 14.