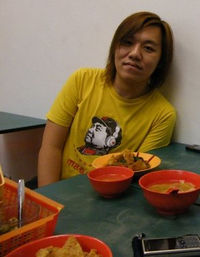 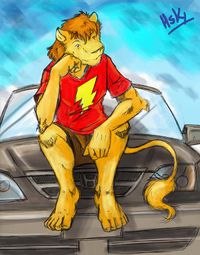 Krado Low (Shi Zi Wang; Krado Horton on Second Life) is a furry who lives in Singapore and founded the Singapore furs group in December 2004. As long as he has been around the furry fandom, his fursona has always been an Asiatic lion.

During the early days of the Singapore furry fandom, he frequented the AnthroAsia forums as an outlet for discussion for fur meets and outings, usually taking "leadership/organizer" roles for such outings. He actively looked out for other local furries, as well as welcoming international guests. As of 2015, he has stepped down as the admin in the face of community pressure, after ten years of service. He went on to run local convention FurryLah, which took place in 2016 and 2017.

Other than maintaining his furry identity, he keeps himself busy with his multiple interests in automobiles, bicycles, computers and the occasional art/photography streak. He worked as a writer for an information technology (I.T.) website called CNET Asia where he is assigned to write informative articles of the latest trends in electronic devices and gadgets, as well as answer user questions via Ask CNET Asia where he would give recommendations on purchasing electronic gadgets and personal computer upgrades. As of 2013 he was focused on automotive journalism for REV Magazine as well as Top Gear Singapore.

Krado's fascination in the furry fandom began in 1994 after watching The Lion King. He was a regular role play (RP) participant on the lionking.org forums until it was closed. Since then, he has not been active in RP-ing, but rather, viewing artworks by established furry artists and attempting to pick up drawing.

The name "Krado" was created as a screen name after being inspired after inspired by the islands of Krabi in Thailand as well as the Toyota Landcruiser Prado SUV. With the fursona initially being an African lion, it was subsequently changed to an Asiatic lion based on Krado's geographical location.