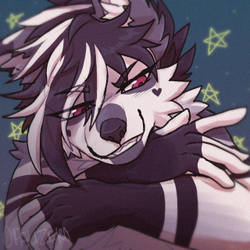 A headshot of Kovu, drawn by opalizero on FurAffinity. 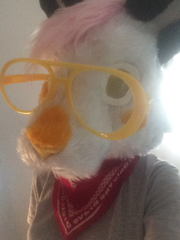 She is a SFW-only character.

Her newest design is inspired by the "TikTok E-Girls"- being black, white, gray and red, and inspired by stripes which E-Girls are known to wear.

Kovu's fursuits were created by herself.

Kovu's first suit was discarded, while her second is being made.

Kovu is not a silent suiter. While fursuiting, Kovu sometimes wears a pair of black glasses / a bandana.

Kovu is a young Israeli furry, and has such she has been unable to visit conventions outside of Israel. She has attended:

Kovu is interested in video games, keyboards & gaming setups, vampirism & witchcraft, and the furry fandom. Kovu's interests also include art and fursuit making which she takes commissions for.

Kovu's music interests include but are not limited to; Alternative Rock, Indie, Symphonic Metal, Powermetal, and Folk Metal.